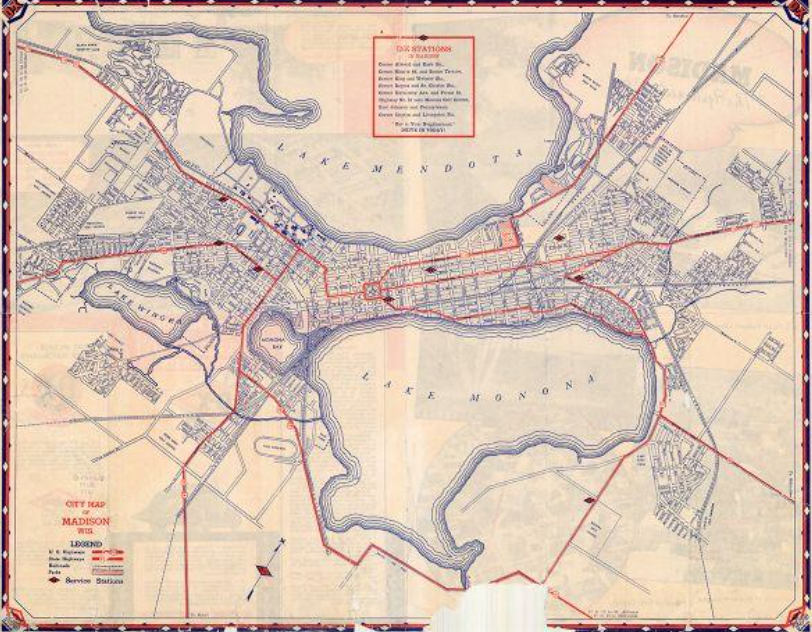 Madison is defined by its lakes. The isthmus affects every part of life in Wisconsin’s capital. It provides beauty, recreation and attracts people from across the world. But the lakes also provide hard boundaries where development is impossible, and they require constant monitorization for environmental problems. Homes, businesses, parks and so much more line the lakes. They’ve shaped and molded life in Madison it’s hard to dissociate them from the town at this point, but once not so long ago they stood undisturbed by development.

Well before European settlers reached Madison, the Ho-Chunk Native Americans inhabited the land. They lived on the land for hundreds of years, and their burial mounds are still the source of controversy today. But in the 1800s European settlers began to threaten the Ho-Chunk for the land. By 1832, almost all of the Ho-Chunk were forcibly removed, according to the Wisconsin Historical Society (WHS).

After the Ho-Chunk had gone, the land was open for whoever could snag it. That man turned out to be James Doty. Doty saw a tremendous opportunity for profit in Madison, which was concisely titled Four Lakes then. He saw the isthmus as an unparalleled beauty in the region and became determined to make Four Lakes the capital, According to the WHS.

In 1829 he purchased 1,500 acres of the isthmus and began plotting out his vision of Madison, according to Historic Madison Inc (HMI).  He envisioned the capitol building holding a prominent place positioned in the center of the isthmus. To magnify the majesty of the capitol, he planned the streets parting to create grand sightlines to the capital building, including diagonal streets that interrupted the grid system. But there was a majorproblem in Doty’s plan; Madison wasn’t Wisconsin’s capital yet. In fact, Madison wasn’t even a city yet. But Doty had profit to gain from Madison becoming the capital, so he fervently pursued his vision. He began his campaign to have Madison chosen as the capital, and four years later he accomplished it. He changed the name of the village from Four Lakes to Madison, after President James Madison. Although Madison was selected to be the capital in 1836, the choice wasn’t official until Wisconsin became a state in 1848, according to HMI.

While Doty’s plot laid the figurative groundwork for the town’s creation, his vision was far from seen through precisely. In fact, his plot had some significant issues. The isthmus was drawn incorrectly, and some plots of land that were sold were actually under Lake Monona. Doty also proposed the creation of a canal slicing across the isthmus near the capital. The canal was ultimately axed from the plan due to the tremendous difficulty of digging it, according to “Madison: a History of the Formative Years” by Daivd Mollenhoff.

Almost immediately, Madison began growing rapidly. In the 1850s, Liquor Tax one of the largest sources of revenue for the burgeoning town, a friendly reminder of how far back Madison’s drinking culture goes (according to Historic Madison: a Journal of the Four Lakes Region). But bigger than drinking, the newly formed University of Wisconsin would prove to be one of the largest drawsto Madison for years to come. UW’s first class met in 1849, two years before the university’s first building was constructed, according to the University of Wisconsin – Madison. The first master plan for UW’s campus, made in 1850, is a far cry from what the university has developed into today. Just five buildings (four of which were dorms) constituted campus. The sparse campus seems miniscule by today’s standards, but it wouldn’t be long before campus exponentially grew. By 1908, UW’s master plan began to resemble today’s campus. Bascom Hill had started to develop, and the space campus occupied swelled to consume a sizable portion of Lake Mendota’s shore. During the same period, the City of Madison was blossoming into a prominent town. Development was beginning to spread out from the capitol as individuals sought out shore line housing. Madison’s population was quickly rising at this time. In 1910, 25,531 people lived in Madison, up over 30 percent from 1900, according to World Population Review. Madison’s population continued to grow at incredible rates. As the University grew, more and more students moved to Madison. Campus grew, development along the isthmus grew, and shore line became a hot commodity. Doty’s vision for a vibrant capital surrounded by lakes was coming to fruition. In the 1920s and 30s, Madison’s population grew by 50 percent each decade, and it would continue growing until the 70s. Once centered around the capital and the isthmus, development was sprawling out quickly. By 1953, development had sprawled out past the reach of the lakes. While the lakes still had a tremendous impact on every day life, for the first time a large portion of Madisonians didn’t live in the immediate vicinity of any body of water.

Madison’s initial draw was its charming appeal provided by the four lakes. Over time, the lakes have remained crucial to the town, and have shaped it’s development and sprawl. Today, Madison remains indebted to the lakes. Our highways snake around them making quick travel at rush hour an impossible feat. But the lakes of the Yahara river still define our pride, our lifestyle and our history.

Wisconsin’s two biggest cities, Madison and Milwaukee, both rely on lakes for their success. Milwaukee is located on Lake Michigan, one of the largest lakes in America. Lake Michigan was a key trading route, and helped Milwaukee quickly grow. In 1860, Milwaukee’s booming industries and location on a trade route made it one of the top 20 largest cities in the country, according to the Milwaukee Historical Society. Milwaukee’s growth was dictated by it’s reliance on the lake, very similar to Madison. When Madison grew, it grew along the lakes and then out. Milwaukee followed a similar path, staying close to the lake as much as possible before spreading west to accommodate the quickly growing population. Today, Milwaukee is still a flourishing city, and is the largest city in Wisconsin. However, it deals with some of the worst racial segregation in the country. Particularly, the proportion of white people that live in rich neighborhoods next to Lake Michigan is much higher than black people who do the same, according to the University of Virginia’s racial dot map. For good and for bad, Lake Michigan helped shape Milwaukee just like Mendota and Monona shaped Madison.