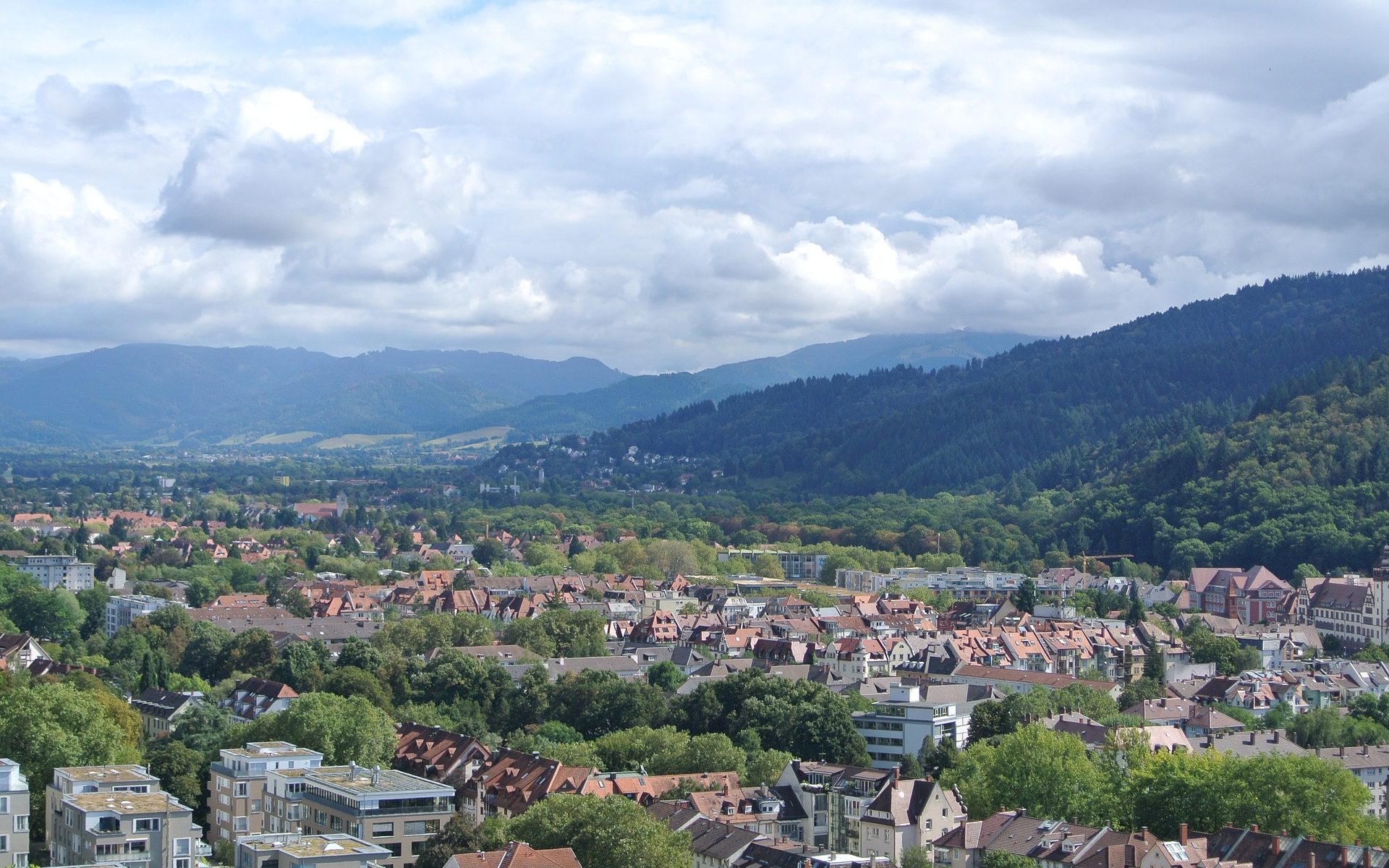 Madison’s flanking lakes, hilly topography and scattered greenery are all stand out features compared to other university towns, and are one reason prospective students might choose to attend UW-Madison.

Alongside Seattle, Madison is one of the country’s only major cities founded on an isthmus.As the lakes define Madison’s identity, so do the forests in its sister city in Freiburg, Germany. The two cities are both similar and different, in many ways, and have kept a close relationship over the last 50 years.

Freiburg and Madison’s cooperative history stretch back to a university exchange program during the 1960s between UW-Madison and the the University of Freiburg. Freiburg, Germany, Madison’s sister city, is nestled in the foothills of the Black Forest in the southeast of the country. Where Madison has water, Freiburg has a similar relationship with the forest. Photo from Creative Commons.

Freiburg is like Madison in many ways. It is physically surrounded by nature, known as one of its country’s most sustainable cities, and houses a vibrant university environment. But one can’t forget the state’s longstanding German heritage and resulting beer culture when thinking about Freiburg.

Small differences mark the distinction between Madison and Freiburg, according to Eric Lewandowski, president of the Madison-Freiburg Sister City Committee. Despite the stereotypes about Germany and beer, Freiburgers often drink wine in the city’s many tasting halls and restaurants. Located on in southwestern Germany near the border with France, Freiburg is abutted by vineyards to the south.

Freiburg is also known as the greenest city in Germany. Mayor Dieter Salomon is also the only provincial representative in Germany’s green party, though that could change soon as another mayoral vote approaches. All non-emergency vehicles are also banned in downtown Freiburg and people get around on an electric tram system.

The two cities became official sister city partners in 1988, after Freiburg’s mayor at the time sent a delegation to the United States to find a suitable sister city in the country. Madison appealed due to its prior close relationship between the universities, comparable size, reputation for sustainability practices, and its relationship with nature.

Like Madison, Freiburg is surrounded by natural wonders, Lewandowski said. It is located in southeast Germany near the border with France, and is met on three sides by the Black Forest, a forested and low, rolling mountain range similar to the Appalachian Mountains.The southern area is devoted to wine grape vineyards, which accounts for Freiburg’s higher frequency of wine halls.

Freiburgers use the forest in their free time the same way a Madisonian might go sailing or fishing on of our many lakes on the weekend. After a satisfying day-long hike into the Black Forest, one can rest their weary feet at one of the many inns located in the forest and spend the night there before returning home the next day.

Lewandowski reflected on that very activity when recalling his time as a graduate student at the University of Freiburg in the 1970s.

“You can see these large mountain meadows with cows in the middle of them with their bells ringing, and people love that,” he said.

Lewandowski didn’t know about Madison and Freiburg’s relationship until he moved to Madison years later, when someone pointed at a Freiburg poster in his house and told him to get involved with the sister city committee.After serving as historian for some time, Lewandowski was asked to join the committee board in 2010.

“I kind of jumped at the idea because I thought it was a wonderful opportunity to become re-involved with my personal german history,” he said.

Though he didn’t make the connection when he first arrived in Madison, Lewandowski says Madison and Freiburg do have similar relationships with their respective regions, which may have given the city an edge during Freiburg’s search for a partner municipality. Bülent Gençdemir traveled to all 12 of Freiburg’s sister cities, including Madison, and filmed in each of them over a year and a half during filming of the documentary, Weltweite Freundschaften, or “Worldwide Friendships”. The film’s premier in Freiburg was on April 11, 2018. Image source and copyright: SÜDFILM Film and Television Production.

The film, Weltweite Freundschaften, which means “Worldwide Friendships” in German, premiered in Freiburg on April 11. Madisonians interviewed in the film include mayor Paul Soglin and others associated with the Madison-Freiburg Sister City Committee.

Freiburg’s influence is seen in Madison’s food culture through the Freiburg Gastropub. The German themed restaurant opened at 2616 Monroe St. three years ago as part of the Noble Chef Hospitality group, which owns other bars and restaurants in the downtown Madison area. It’s website dedicated a page to the cities’ relationship, and thanked the chair of Freiburg’s sister city committee Toni Schlegel for help in importing German products.

The restaurant closed recently and is reopening at 107 State St. as the Freiburg Tap Haus, fusing with the locations former occupant, the Wisconsin Brewing Company Tap Haus. The new restaurant will incorporate the best of each restaurants’ menu and is slated to open early May.

May is also when the annual “Maiwanderung” is held by Freiburg’s sister city committee.  UW-Madison exchange students in Freiburg walk around the city on a guided tour of the city with academic staff and committee members.

Sister city committees coordinate communication between the cities as well as travel and cultural events, Lewandowski said. The past year’s activities included lectures on both American and German culture, and brainstorming activities for Freiburg’s 900-year anniversary in 2020.

With 2018’s Maiwanderung complete, Freiburg and Madison are set to continue their sisterly relationship for many years to come.

Madison is partnered with nine sister cities, including Freiburg. Sister cities are selected based on common interest in each other’s “culture, business, technology, education, agriculture, sports or humanitarian goals,” according to the Madison Sister Cities Q&A. Since 2011 the City of Madison Sister City Coordinating Committee has been in charge of evaluating sister city applications and providing a recommendation on the final decision on applicants to the Madison City Council. Once established, sister city committees will be assembled to organize different trips and events between the cities and coordinate funding for their activities as nonprofit 501(c). Madison’s other sister cities are Ainaro, East Timor; Arcatao, El Salvador; Camaguey, Cuba; Kanifing, The Gambia; Mantova, Italy; Obihiro, Japan; Tepatitlán, Mexico; and Vilnius, Lithuania.