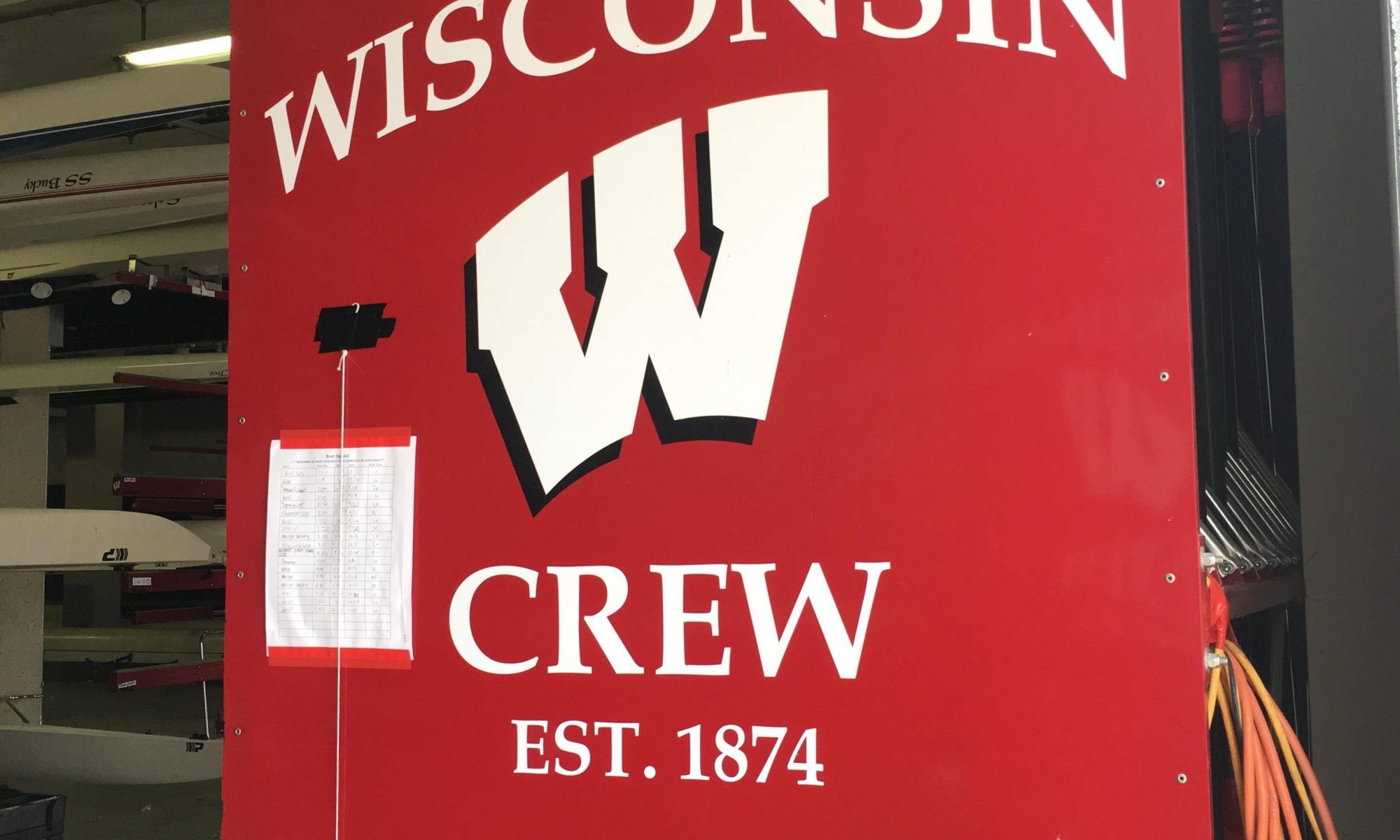 Watching the sunrise over Lake Mendota is a time of serenity for most, but for members of the Wisconsin women’s rowing team, the slow rising morning rays coincide with an intensive cardiovascular workout.

With practices starting before 6 a.m. every weekday during the season in the fall and spring, women’s rowers are used to an early wake-up-call.

Maria Schmid, former varsity rower named Second-Team All-American as a senior at UW-Madison, recalls four years of early rising to get out on the lake — a time that comes much earlier for rowers at other universities.

But for rowers at Wisconsin, this is not the case. With the City of Madison’s unique position on an isthmus surrounded by Lakes Mendota and Monona, and with Lake Wingra nearby, training facilities are right at their doorstep.

The close proximity to Madison area lakes, however, is just one of many features that sets women’s rowing at Wisconsin apart from other collegiate programs nationwide.

These three programs include the men’s team and the women’s lightweight and openweight teams, which are all accommodated within the recently built boathouse.

When the Porter Boathouse was built in 2004, it replaced the original crew house built in 1967 that was located next to the Red Gym, according to the Wisconsin Athletics website. The 52,000 square foot boathouse sits at the end of Babcock drive along the south shore of Lake Mendota and cost $8.56 million.

Though both boathouses have always been located on campus, junior lightweight rower Shannon Lipe said the current location benefits busy student athletes because it is closer to classes and student housing.

“We’re really lucky that our boathouse is right on campus,” Lipe said. “It takes me only seven minutes to get to the boathouse from my house.”

Karly Laney, women’s lightweight assistant coach, said that the coaching staff also benefits from having their offices right inside the boathouse.

“We can look out our office windows here at the boathouse and gauge the weather for the day,” she said.

Laney, who has been coaching rowing for five years, is finishing her first year coaching at UW. She said that the teams mainly launch their boats from and use Lake Mendota for practicing, though Lakes Wingra and Monona are options — it all depends on the weather. On Lake Mendota, the team has different sites they can depart from, Laney said, using either the launch outside the boathouse or Marshall Park, nearer to Madison’s West Side.

“The lake is awesome because we have multiple locations where we can launch out of and be able to find good water,” Laney said.

Coaches have to constantly monitor the radar to see if conditions on the lake will allow for teams to go out and train. Weather is the biggest deciding factor in where the practice will take place that day, according to Laney.

Rolling with the punches

The unpredictability of Wisconsin’s weather poses potential setbacks to practicing out on the lake, especially in the springtime.

When conditions like strong winds, rough waters, thunderstorms and a frozen lake prevent the teams from getting on the water, Lipe said that they will train inside the Porter Boathouse. Here, the athletes utilize standard exercise equipment like weights and rowing machines, supplemented with specialized indoor rowing facilities, like “the tank.”

“[The tank is] two lines of rowing seats and we can put our oars into them and it circulates the water to simulate a boat moving through the water so we can practice our technique,” she said. “It’s not exactly the same, but it’s better than not doing any rowing.”

Special equipment like the indoor rowing tank enables the athletes to mimic movements that would be used outside, however, UW-Madison sophomore Alyssa Dezeeuw said nothing compares to getting out on the lake.

“[Rowing] requires technique that can only be learned and developed through rowing on the water in a boat rather than using the rowing machines every day,” Dezeeuw said.

Dezeeuw, who rowed on the lightweight team her freshman year, said that coaches will try to notify the team the night before whether they will be going in or out. Sometimes, conditions like lightning force the team to leave the water once they have already started practicing because it then becomes dangerous to be out.

Yet, getting out on the lake consistently is not the be-all and end-all of successful practices, according to Laney.

“Not being on the water is actually okay, because we know how to work without always needing to be on the water,” she said.

While all programs across the country deal with weather, Wisconsin’s fickle seasons and typically long lasting winters bring an added obstacle.

The size of Lake Mendota provides many advantages, from more locations to launch from to less interference from other water traffic. But, the large size also leaves the lake vulnerable to strong winds.

“This is a very unprotected body of water and sometimes we can’t get out on the water because it’s too rough and it’s dangerous,” Lipe said. “Whereas, if we were rowing on a more protected river, we would have more of an advantage because we’d be able to get more water time.”

Protected water, according to Lipe, means smaller bodies of water with surroundings like buildings and trees that cut down wind resistance and allow for flatter water more often.

Other collegiate programs have both more protected bodies of water and warmer climates that allow them to practice outside in the winter when the teams in Wisconsin cannot.

“If you look at the rankings over the past 10 years, a lot of the teams that are up there are in places that [the water] does not freeze,” Lipe said.

Despite dealing with Midwest winters, Laney points to past records and current achievements to show that Wisconsin women’s rowing continues to do well in competitions no matter the practice conditions with which they are faced.

“Results wise, it hasn’t phased us,” Laney said, noting that the women’s lightweight team defended their title as Champions of the Eastern Association of Women’s Rowing Colleges Conference last weekend.

Laney said that she thinks the teams continue to improve not only because they maximize water time when they can get it, but also because of the rowers’ work ethic and the strength of the program itself.

“We train really, really hard and have success because we have strong, talented athletes and the legacy behind the rowing program is excellent,” Laney said.

The women’s teams, in Laney’s view, possess the dedication and the enthusiasm necessary to having such an all-around strong program.

“It makes it easy for [the coaches] to ask of them for the hard workouts that we do, or the different weather we have to work with, they’re totally on it,” Laney said. “They’re always ready to go and take on the challenge.”

No, they’re not a candy, toy, nor a distant cousin to the pogo stick.

They’re actually a handy accessory that serves a critical role in keeping the hands of rowers warm in freezing conditions.

“They’re not gloves; they go over your hand and over the oar so that you can still have skin contact with the oar, but it protects your skin from the outside so we don’t freeze,” Lipe said.

Lipe said that along with a down pullover and neckwarmer, pogies are essential to her rowing gear during chilly morning practices in the fall and spring.

Different types of pogies are made for different activities and sports. From pogies for biking in the cold, to pogies for ice fishing, these coverings get modified into much larger versions than are worn for rowing like Lipe’s.

But, they can also do more than just keep a rower’s hands warm.

Rowers can quickly develop forearm and wrist injuries from poor technique or fatigue, according to Rumball et al. But, pogies can serve as, “[a]n excellent preventative strategy in colder weather...” to avoiding these types of injuries by allowing the rower to maintain a looser grip on the oar itself.

Though they appear as simply thin pieces of fabric, pogies provide an effective solution to rowing in bitterly cold weather while still maintaining a proper technique.