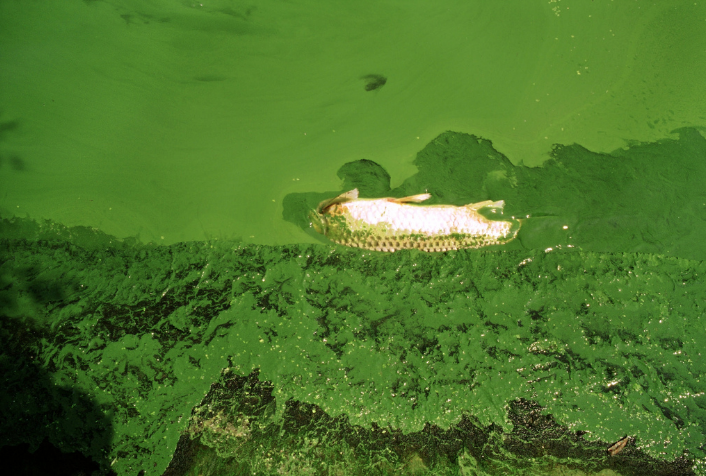 Picture an ideal, healthy lake. What color is it? Is it crystal clear? Are there algae? Are there fish?

The way humans treat Madison lakes has a negative impact on the surrounding ecosystems. This is because, according to Brad Herrick, ecologist and research program manager at the UW-Madison arboretum, every part of an ecosystem is connected to another.

That being said, according to Linda Graham, professor of Botany, Freshwater and Marine Sciences and Water Resources Management at UW-Madison, “Madison lakes are not healthy.”

Even if the lakes look healthy, some factors that negatively impact the lakes can’t be seen with the naked eye. For instance, according to Graham, Madison lake water has “way more fertilizer than should be there.”

Fertilizer used in lawns, farming and other forms of agriculture washes into lakes through processes such as erosion, according to Graham. Nitrogen and phosphorus in the fertilizer feed a toxic but naturally-occuring microorganism known as “cyanobacteria.” This causes populations of this microorganism to grow larger than they otherwise would.

Even the way that humans perceive how lakes should look like can be destructive.

“We just have this odd concept of beauty for our lakes– our concept of beauty is that it should be crystal clear water, we should not be able to see anything in it,” said Graham. “But if we had totally lifeless water, we wouldn’t have any fisheries, we would have no seafood industry, there would be no life in the lake. So there does need to be a collection of natural life [like unattractive algae] in the lakes.”

This concept of beauty —of clear lakes and no green, slimy algae — often leads people to remove a species of good algae called “Cladophora” from the lake waters, according to Graham.

Cladophora helps lakes by capturing phosphorus and nitrogen, keeping it from feeding harmful cyanobacteria growth. Additionally, Cladophora is coated with methane-destroying bacteria that breaks down the methane—a greenhouse gas— typically produced at the bottom of lakes before it makes its way to the atmosphere.

“It is visible at the edges of lakes and it is the good guy, we should not got get rid of it,” said Graham. “It does no harm, it does only amazing good.”

Humans can harm Madison lakes in ways that are less direct as well. For instance, Global Warming is an issue that is largely the result of human activities, according to Globalchange.org. Greenhouse gases—which trap heat within the atmosphere—are emitted from activities such as fossil fuel burnings and forest clearings.

Climate change can impact lake ecosystems in a variety of ways, according to Herrick. Potential impacts of climate changes include creating warmer water temperatures and an increase in winter melting. Additionally, salt used to melt snow is often washed out into wetlands and into lakes and can cause issues for wildlife as well.

Climate change also results in an increase in stormwater runoff, Herrick said. According to Kirsti Sorsa, program manager of the Department of Public Health of Dane County, stormwater brings contaminants from lakes and agricultural areas into the lakes. According to the Minnesota Pollution Control agency, stormwater also creates large fluctuations in water levels and can increase phosphorus, a nutrient that feeds cyanobacteria. Additionally, these large fluctuations in water levels can also damage the ecosystem by killing a number of plant species, resulting in a reduction in species diversity.

“Climate change can impact a variety of things [in an ecosystem] in a variety of ways,” Herrick said. “It’s sort of hard to put your finger on [just] one impact.”

Additionally, Sorsa said global warming can also “feed water borne illness.” One example is E.Coli, a type of bacteria which, depending on the strain, can cause disease. If even non-pathogenic E. Coli is found in Madison lake waters, the beach is closed immediately, as it may indicate other waterborne bacteria and parasites such as salmonella, campylobacter, norovirus and giardia, said Sorsa. She also said that the situation of global warming is not expected to get any better.

“The situation is expected to get worse in terms of … waterborne diseases increasing, and there association between waterborne illness and increasing participation,” Sorsa said.

“I don’t think we want to preserve what we have now, dogs are dying, people are becoming ill, it’s just not good,” Graham said. “It’s really hard to [revive] wetlands … [it’s basically impossible] … So retaining [natural wetlands] is the number one thing we can do for lakes”

There are a number of ways to prevent damage to lakes. Sorsa suggested picking up waste and using fewer fertilizers on lawns and farms. According to Graham, the number one thing that one can do is create a barrier of wetland vegetation next to the body of water.

“If we just plant plants right close to the water as the fertilizer washes [from] the rain down to [the] lake—the lakeside plants will slurp it up and turn … it into beautiful flowers,” Graham said. “Wouldn’t it be nice to have our excess fertilizer produce beautiful flowers instead of harmful toxins?”

In regards to global warming, the average person can help reduce rates of greenhouse gases, according to the Scientific American. This can be done by not driving cars and instead taking mass transit or using methods of transport that don’t require gasoline, such as cycling or walking. Additionally, one can also eat less meat, give birth to only one child, and only buy products that are absolutely needed.

Additionally, one has to remember not to toy with the ecosystem too much.

“The ecosystem is in balance,” Herrick said. “It’s not stagnant, it’s always changing, but humans have a tendency to change things too fast and ecosystems are not able to keep up with that balance.”

Through regular day-to-day human activity, humans disrupt the fragile nature of the Madison lake system’s ecosystem. From fertilizer runoff to global warming, humans contribute to many of the negatives of lake life, such as toxic cyanobacteria blooms that kill dogs and waterborne diseases that result in, at best, beach closures or, at worst, disease. While it is almost impossible to restore a lake system after it has already been damaged, Madisonians can prevent these issues in the first place-- or stop them from getting worse-- by picking up waste and reducing fertilizer use on farms and lawns. Additionally, in order to mitigate the effects of global warming, one can also refrain from driving, or having more than one child. In order to consume less, one can also only buy products which are absolutely needed. Additionally, it is also important to be aware that the way one perceives beauty may be harmful for the lakes-- certain types of algae can actually be beneficial. Lastly, it is also important to be mindful of the ecosystem as humans are particularly capable of disrupting its balance.