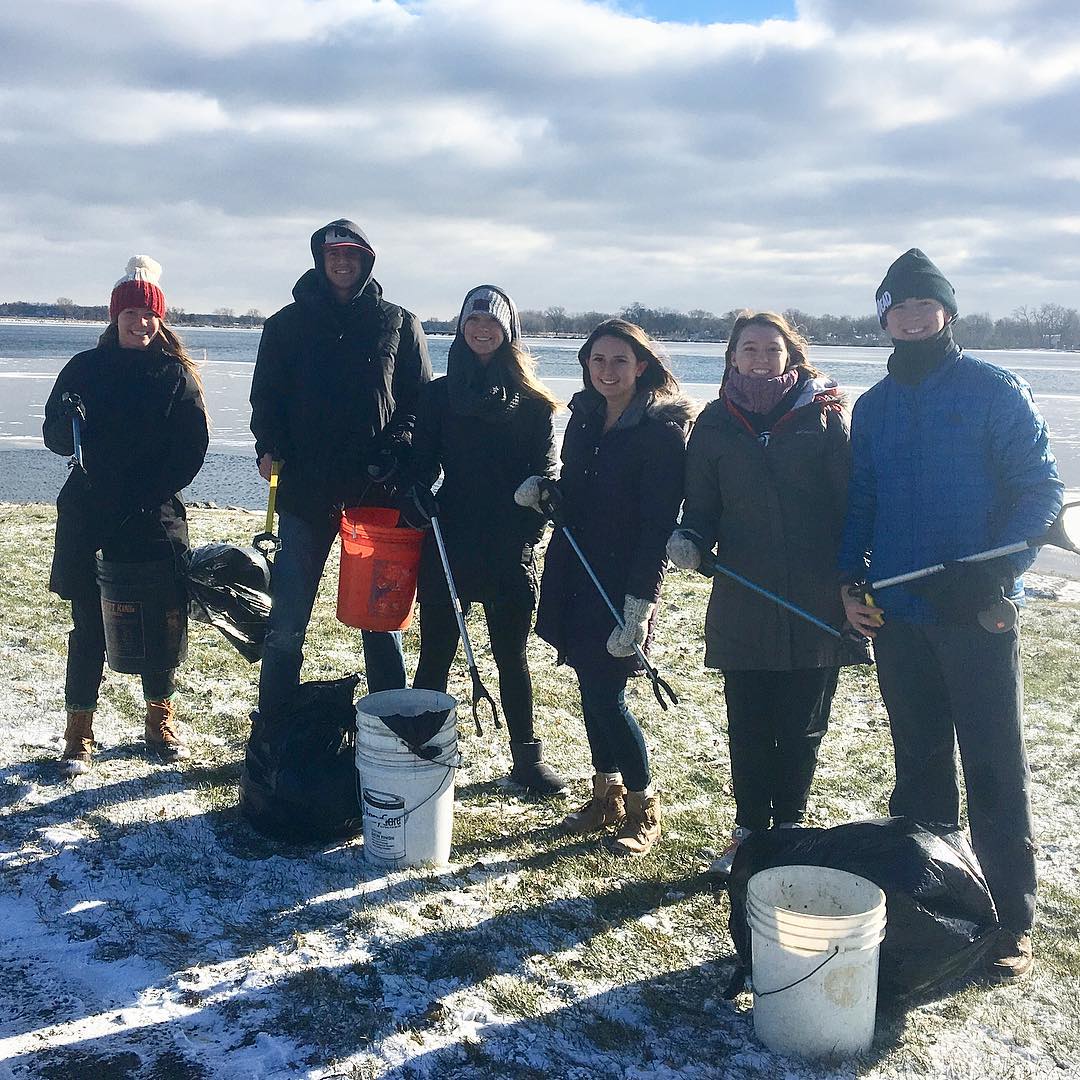 Not every campus is nestled with major lakes around it, or has people willing to actively maintain that resource, but the University of Wisconsin-Madison boasts just that.

The Division of Recreational Sports organizes intramural leagues for students, runs the recreational facilities on campus, and it also houses sport clubs. There are 43 sport clubs, with that number rising every year. Some involve water, but the fishing and water ski & wakeboard clubs are unique: they take advantage of the lakes of Madison during their seasons.

Junior Isaac Barber is the Wisconsin Fishing club’s community service coordinator. He credits his childhood for motivating him to pursue a degree in wildlife ecology, which works hand in hand with his role on the team.

“A lot of it is my passion for the outdoors,” he said. “Growing up with a hunting and fishing background, I have a lot of connection to the species I pursue and the environment I pursue them in.”

Some of Barber’s basic tasks include finding members to facilitate fundraisers, run their booth at the Wisconsin Fishing Expo — held at the Alliant Energy Center in Madison, it’s their biggest fundraiser — or help out when the club hosts its own tournament in the fall. But Barber also identifies volunteering opportunities for the club.

Volunteering is made a crucial component by the club, as seen its 2017 constitution:

“Between tournaments, members volunteer in the community, learn from speakers​, fundraise for the upcoming season, and connect through social events.”

Barber approaches his involvement with the club and the sport he engages in fully aware how dependent he and fellow members are on the lake.

“If you use a resource like we do, you have to do something to give back to it,” he said. “Honestly it’s kind of fun, because some of the ones we do [help] improving the resource now.”

After being elected service coordinator, he reached out to local fishing organizations in the summer to find anyone who needed help. One event included members going out to Lake Wingra and clearing invasive brush from the shore.

Barber noted there’s been more of a focus on the habitat since he’s stepped in, and he’s even seeing members start to embrace their volunteer events (which is not listed in the team’s requirements on their Wisconsin Involvement Network site).

“I think guys are getting excited about trying to improve things in the area, and it’s rewarding to make an impact on something you use regularly.”

Other volunteer events include the “Fishing for Dinner” Volunteer Program with the Wisconsin Department of Natural Resources, which is “designed to teach others how to fish and subsequently cook their catch,” according to the fishing club’s events calendar.

The club has around 80 members with at least half staying very active, according to Barber. Once a member joins, it opens up a very social environment and the opportunity to enjoy a passion with a broader audience than possible on your own.

“You can join and get on the members page, and basically have hundreds of guys at your disposal that you can just say ‘Hey, I want to go fishing here, does anyone want to come?’”

It’s helped Barber find the community that students often look for, especially at a big university like UW-Madison.

“Most of the friends I’ve made through school have been through [the club]. You make a lot of lifelong friends that you can just hang out and go fishing with whenever.”

Junior Jarad Meyer is the captain of the Wisconsin Water Ski & Wakeboard club. Joining the club has allowed his lifelong skiing passion to continue.

“It has been a huge part of my entire life, so being able to have this really unique opportunity, it’s really been life-changing quite frankly.”

Meyer has been involved with the club since his freshman year. The team’s mission statement emphasizes the club to look at activities for “the mutual benefit of the members and the public.” And with this year’s president in Dan Larson, he’s seeing volunteering really take precedent.

“We’re really trying to make that push to make [volunteer events] about the lakes,” he said. “And to to make volunteering a primary core value.”

One event Meyer took part of this year was a picking up trash at Lake Mendota. Sounds rather painless, right? Well it was during the middle of winter in windy, 20-degrees-below weather. But the event and its weather didn’t deter the purpose and meaning behind it.

Picking up trash is an act by the club where “everyone really benefits,” according to Meyer, which harkens back to the club’s mission statement. It doesn’t just help the team, but it’s for the casual kayakers, fishers and anyone else who enjoys the lake.

In 2016, the Badger Herald spoke to members of the club as their spring season was set to begin, and they recognized how important the lakes are to UW-Madison.

“A lot of other schools aren’t as lucky as we are to have the water right there next to campus,” ski team member Sam Smogard told the Badger Herald. “We are just so fortunate to be right in between two lakes here.”

With expensive equipment involved — ranging up to $2,000, Meyer says — having a clear lake is one less thing to worry about.

“[We’re] just trying to keep the lakes as clean as possible, we can’t have skiers or our boat or our equipment hitting trash.”

The club has embraced making itself a community, not just a club. Meyer notes he’s met people to enjoy the sport he loves with, but he’s also met best friends and even people he’s lived with while at school in Madison.

“Obviously everyone loves to ski and it brings us all together, he said. “These are gonna be some of your friends throughout college.”

Like Isaac Barber and the fishing club, Meyer has found his niche while at UW with the water ski & wakeboard club. It makes the campus more manageable, and it gives a place to thrive.

“It really shrinks it down from 50,000 people to your core,” he said. “The UW Ski Team community has really been a blessing.”

Neither the Wisconsin Fishing club nor the Wisconsin Water Ski & Wakeboard club require their members to participate in volunteer events. But, these events can help towards funding.

Isaac Barber, community service coordinator for the fishing club, noted that Rec Sports sport clubs have a liaison they report activity to. This helps Rec Sports know what its clubs are accomplishing, but it also affects funding for clubs, Barber says, as activity by clubs earns points and the points can lead to better funding.

The fishing club receives some funding from Rec Sports, but they also have sponsors, like Hummingbird and Rapala. These sponsors help members get discounts on gear, according to Barber.

On the other hand, the water ski and wakeboard club does not have sponsors, according to captain Jarad Meyer. This means gear for the club’s expenses falls on members. However, club dues collected from members go on to help with a variety of things, from equipment repairs to travel expenses, according to Meyer.

Rec Sports helps the water ski and wakeboard club with some funding, although they also self-fundraise outside of collecting dues.