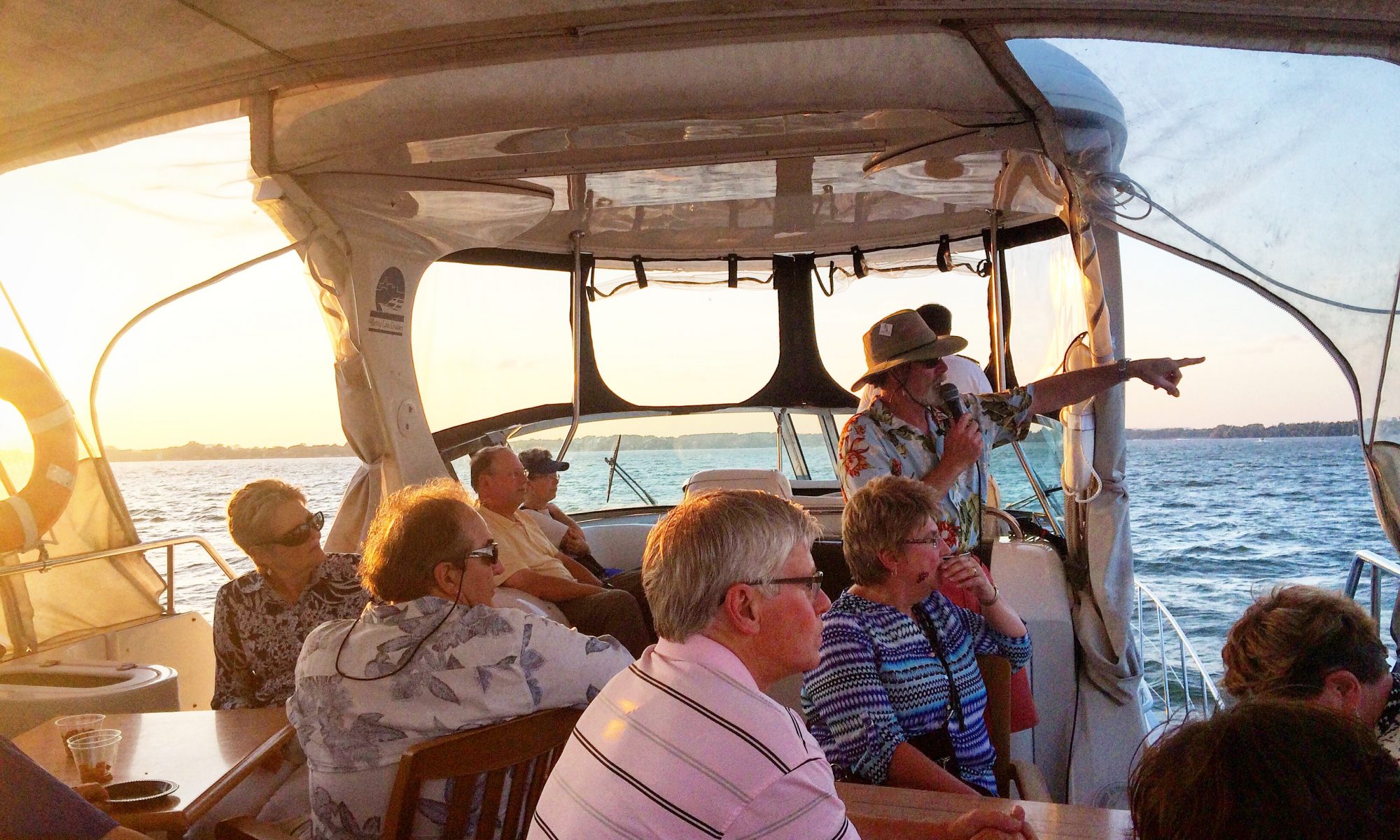 Two charter boat companies provide a lake life on Madison’s Lake Mendota and Lake Monona to showcase the city from the water. Betty Lou Cruise and Pontoon Porch bring large groups of people out on the water, so they are able to enjoy their summers with friends and family.

Both the Betty Lou Cruise and Pontoon Porch offer Madison locals and tourists a way to see the city from a different viewpoint. Guests on these boats are able to appreciate the water and really take in the beautiful, scenic Madison while having the times of their lives.

Bill and Betty von Rutenberg owned two restaurants right on Lake Mendota’s shore line prior to beginning Betty Lou Cruise. The idea for a restaurant on a boat first began when Betty’s sister sent her an advertisement of another company chartering a boat on Lake Minnetonka. Her sister thought Madison would be a good market to start a business like this since Betty and Bill were already in the restaurant industry. However, Betty and her husband had three sons at home and had no time to even consider starting another business.

As the von Rutenberg boys grew older and played a larger role in the restaurant businesses, they decided that Madison’s lakes would be a great location for charter boats since it was becoming a more tourist friendly city. Soon after, Betty passed away in 1996.

“What’s ironic is after my mom died, I was going through some of her stuff and I found that magazine picture from my aunt, and I’d never even heard, seen or knew about it because my mom didn’t even remember it,” Jack von Rutenberg, son of Betty, said.

The von Rutenberg’s saw an opportunity in Madison’s growing market and decided to take the chance. The family named the cruise boats after their mother Betty to continue her legacy.

The von Rutenberg’s only goal after starting the Betty Lou was to break even and promote their other restaurants. They had no idea how successful it would become.

“Not only were we already in the business but there wasn’t a catering company that had a market up, we were selling the food to ourselves,” von Rutenberg said.

After they hired their first few crew members, they always remembered that if they were doing their job correctly, people would come off the boat handing out hugs left and right.

“People looked at us like we were crazy, but sure enough, because of what we coached, the culture we created and the things we stressed, it happened. And it happened all the time, and it still happens,” von Rutenberg said.

That family culture held true among not only the customers but with the staff as well, according to von Rutenberg.

Anna Elsmo first began working for Betty Lou Cruise in college. During her interview, the general manager hired her on the spot. Little did she know that she would be working her first cruise that same evening.

“Let’s just say it was a sink or swim situation, and I swam,” Elsmo said.

Elsmo didn’t know if she would be successful, but she stayed with the company for five years after graduating from UW-Madison. She took on management responsibilities, eventually working her way up to General Manager of Administration of Betty Lou Cruises and the Sales and Marketing Representative of von Rutenberg Ventures, before leaving the company last year.

General manager, or in nautical terms chief mate, Bryce Baker, took over Elsmo’s position at Betty Lou Cruise after she left. Although new and still learning the inner workings, he enjoys the position because the Betty Lou customer experience is different from anything he’d ever seen.

“When a guest steps foot on a public cruise or private charter, they are going on a two or three-hour vacation away from the worries of everyday life,” Baker said.

These customers are actually happy while eating their food out on the water, according to Baker.

Like Baker, Elsmo first fell in love with Betty Lou because the experience was unlike any of her previous server positions.

“Whether they were locals who have been in Madison for 20 years, or visitors in for a weekend, they were happy being on the water, sipping on tropical drinks, eating delicious food and taking in the views of Madison as it’s meant to be seen,” Elsmo said.

There is no better way to experience Madison than this. Whether you are standing on the open deck or relaxing in our spacious cabin, you have got the best seat in town (Betty Lou Cruises Website).

“I hear over and over people saying, ‘I had no idea Madison looked like this from the water,’” von Rutenburg said.

The Betty Lou Cruise allows people see Madison in a way they’ve never seen it before, according to von Rutenberg. These cruises remind people what the Madison community entails.

Although both charter boats, Betty Lou Cruise and Pontoon Porch each found their own niches in Madison.

The idea for Pontoon Porch came to owner, Joe Shulla when he was in his early twenties. Shulla and a friend wanted to build a screen porch down by the shore of Lake Wisconsin, but the Department of Natural Resources (DNR) stopped them. It is illegal to build anything within 100 feet of the lake. So, Shulla and his friend bought 55-gallon barrels, got a crane and put the screen porch they were building on the barrels, so it would float on the lake. Hence the name Pontoon Porch.

“The idea came to us because once we put the screen porch on the lake we of course got some tables and put a grill on it. We said,‘Wow, we are out on a lake and we are grilling out, it just doesn’t make sense,’” Shulla said.

As opposed to Betty Lou Cruise’s more familial atmosphere, Pontoon Porch is slightly more laid back. They do not cater food for guests, rather guests are allowed to bring their own food on the boat. But Shula’s grill-out tradition lived on, and there is a grill on Pontoon Porch’s boat in case guests want to grill out themselves.

Pontoon Porch tailors the experience to whatever guests want by letting them choose where they want to go and see on Lake Monona.

“This way, it allows people to customize their own outings,” Shulla said.

Originally, Shulla hoped that Pontoon Porch would be the essence of a ferry boat — taking people to and from each side of the lake in the mornings and evening before and after work, for outings such as Concerts on the Square, the Farmer’s Market and much more. However, Shulla found that people weren’t interested, they preferred being able to choose their own boating experience.

“There’s not really much you can do on that particular lake unless you own a lake front property,” Shulla said.

This crossover between a pontoon and a porch really gives people an opportunity to see whatever they’d like on Lake Monona since they don’t have much of a chance otherwise, and they’re able to do it from the comfort of this home-like boat, according to Shulla.

Chief Mate Corey Sielaff attested that Shulla heartwarming personality has made this boat feel like home to all customers and staff members.

“You just get to meet a lot of different people, talking to them and hearing their stories of how they know Joe — because everyone knows Joe — how they heard about the boat and being able to tell the story of the boat, it’s the best part,” Sielaff said.

Betty Lou Cruise and Pontoon Porch are direct competitors with each other because they are the only charter boat companies in Madison. However, each has found their own niche in market because they offer different opportunities for customers. They mutually share the lakes, giving different perceptions of Madison’s offerings, which makes them an essential part of the city’s culture.

Two charter boating companies glide across the Madison’s waters throughout the summer months. Betty Lou Cruise and Pontoon Porch have become staples to Lake Mendota and Lake Monona for tourists and locals who want to go on outings with small or large groups of people.

Betty Lou Cruise has four cruise boats, two on Lake Mendota and two on Lake Monona. They offer both private charter cruises and public charter cruises, to cater to customers varying needs. One of their most popular public cruises is the Fiesta cruise, according to Chief Mate Bryce Baker. This cruise features a delicious selection of fajitas with several protein options  like shrimp, chicken and steak, as well as some amazing drink specials like unlimited margaritas. Private charter appetizer cruises are most popular and practical for business professional outings, but Betty Lou also features special cruises for large groups, such as bachelorette parties, according to owner Jack von Rutenberg.

Pontoon Porch offers a wide array of outings, all dependent on who schedules the cruise. Although they do not offer public cruises, their private cruises are tailored to that group’s preferences. For example, one day a group of 60-year-olds may be on the cruise to learn about the history of the lake’s surroundings, and the next day a group of 21-year-olds may be celebrating a birthday and partying. Owner Joe Shulla explains that the college-aged cruises make him nervous and he always tries to find the most responsible person on the cruise in case something were to go wrong.

No matter the type of cruise, Betty Lou Cruise and Pontoon Porch both offer a variety of ways for people to see Madison’s beautiful scenery from the water.