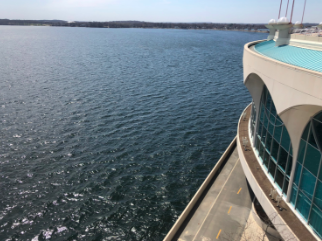 For a structure that opened its doors after most of University of Wisconsin-Madison’s Class of 2018 were born, it’s hard to imagine Monona Terrace’s roots actually stretch farther back in Wisconsin history than Bucky the Badger himself.

Yet, the Wisconsin story and characters behind Monona Terrace make it a symbol just as “‘Wisconsinite”’ as cheese, beer and snow.

Despite nearly 60 years separating its original vision and completion, Monona Terrace now shines as the final and latest work by one of Wisconsin’s favorite sons and perhaps one of the greatest American architects of all time, Frank Lloyd Wright. Monona Terrace was the original name intended for the structure when its first concept design was submitted by Frank Lloyd Wright in 1938, according to office and design administrator at the Monona Terrace, Sara Carizzal.

But Monona Terrace’s journey from the brilliance of Wright’s mind to poured concrete was far from a smooth one.

The Monona Terrace project was considered a civic center at the time, so Wright intended for it to have a gym, auditorium, rail depot, marina, courthouse, and a city hall in order to accommodate all of the modern amenities that a state-of-the-art civic center would have had at the time in Madison.

However, Wright’s romantic and glamorous pitch for its construction was narrowly defeated by a single vote, according to the Monona Terrace website. Three years later in 1941, Wright began gaining traction through municipal voter support, but the world had other plans. The resource drain resulting from the United States’ entry into World War II brought Monona Terrace’s progress to a sudden halt once again.

While an icon in the architectural space, Wright was far from the gold standard when it came personal issues such as financial stability and marital problems. Much of the Wright’s inspiration for his inaugural design arose from a personal ego and demeanor that found himself at heated odds with many Wisconsin and Madison city officials sitting on the financing side of the table for the Monona Terrace project.

Following the economic boom after World War II, Madison voters approved a $4 million allocation to revisit the idea of constructing Monona Terrace to serve as a new auditorium and civic center in 1955, per Mononaterrace.com. But the Monona Terrace rollercoaster still had more unexpected turns ahead.

This time money wasn’t the problem, but instead Madison legislature. In 1957, the cCity of Madison passed a bill that limited the total height any structure built on the Monona lakefront to 20 feet. Wright and his vision were pushed to the sidelines for another two years until the bill was repealed, and that time would prove critically lost upon Wright’s death in April 1959.

Yet, even after his death, Wright’s spirit and unwavering desire to deliver Madison an iconic structure that embraced Lake Monona lived on, and it channeled through his apprentice and future Monona Terrace architectural lead, Tony Puttnam. View from left side of Monona Terrace rooftop. Photo by David Hayes

Attempts to approve Lake Mendota’s construction and finally break ground continued to fall short until Madison voters approved a compromise in transforming Wright’s original design into a convention center in 1992.

Five years, $8 million in private donations and $59.1 million raised by the State of Wisconsin and Dane County later, the Monona Terrace as it’s known today opened its doors for the first time in 1997, nearly 60 years after Wright first drafted the vision.

According to archival information from Monona Terrace, one could even argue that Wright pioneered the original identity and mission of Between 2 Lakes itself in a statement he gave 80 years ago in 1938.

“This scheme [Monona Terrace] discovers the lake and claims the lake for the life of the city,” Wright said.

It’s safe to say the Richland Center, Wisconsin, native and renowned architect’s heart was in the vision, considering Wright only received $250 for the entirety of his work on the design.

“Wright said that being elected project architect for the Monona Terrace by the people of Madison meant more to him than any other award,” per Mononaterrace.com.

Even with such a rich history and symbolic nature, a fair amount of the UW-Madison community is much more than familiar with the Union Terrace than Monona. But what some may not know, across the isthmus and down the hill from the Capitol building lies an even more grand terrace in design.

“Well I think we definitely have different draws. A lot of our events are geared towards family, for instance our community events, we make them family-friendly through the kinds of artists we invite and what we expect from those artists when they’re performing,” Carizzal said.

To Carizzal, the key difference between Madison’s two terrace is the split between the cultures of UW personnel and non-university-affiliated professionals or families. “We’re very family oriented.,” Carizzal said. “I feel like the Memorial Union Terrace probably has some of that, but it’s really got a younger crowd, and it’s a lot more casual in that kind of way with [college] kids having fun versus Mom and Dad and their three kids.”

As both a graduating senior at UW-Madison and a Sun Prairie, Wisconsin, native, Zach Epstein is someone who serves as a testament to supporting Carizzal’s claims surrounding the different cultures Monona and Union Terrace respectively attract.

“Growing up I knew about the Monona Terrace, but I didn’t go to events there all that often. It’s a picturesque building designed by Frank Lloyd Wright that overlooks one of Madison’s lakes,” Epstein said.

While Epstein did not visit Monona Terrace frequently as someone who grew just outside Madison, he found the quality of his experiences there much greater than the quantity.

“I think it’s a tremendous asset to the Madison community as it hosts a variety of events anything ranging from sports to charity dinners to high school proms. Every event I’ve been to that was held in the Monona Terrace convention center space has been a great time,” Epstein said.

According to another Madison area native, Luke Geistlinger, those events are not only a great time, but can hold quite a great deal of sentimental value to someone who frequented Monona Terrace growing up on the East Side of Wisconsin’s capitol city.

“Monona Terrace is an iconic part of Madison and one of its most photogenic buildings. But it’s much more than that, it’s an important part of the community, especially for people in the Madison area,” Geistlinger said.

“Monona Terrace actually holds a special place in my heart because that’s where I had my first kiss with my high school crush when I attended my junior prom there.” Unbeknownst to many Madison area natives, one of the greatest singers in American history, soul music icon Otis Redding, perished in the icy winter waters of Lake Monona on Dec. 10, 1967. Redding and his band, The Bar-Kays, had performed in Cleveland the night prior and decided to fly through inclement weather to Truax Field in Madison for a show at the now gone music venue known as The Factory. Just miles away from their intended destination, Redding’s plane crashed into Lake Monona, resulting in the death of Redding, the pilot, and four of the five members of the Bar-Kays. A memorial for the victims was later erected by the Otis Redding Memorial Fund, and still sits on the rooftop of Monona Terrace today. Tragically, Redding’s death came just three days after the final re-recording of what would go on to become his smash hit, “(Sittin’ On) The Dock of the Bay.” After being later released in January 1968, this song would later prove the first posthumous single to reach the top spot of U.S. music charts after being released in 1968. Beyond Redding’s personal hits and musical popularity in his own right, the “King of Soul’s” voice continues to live on through a featured presence in modern music as well. In 2011, a sample of Redding’s voice from his 1966 song “Try a Little Tenderness” appeared in the smash hit “Otis (feat. Otis Redding),” by hip-hop artists Jay-Z and Kanye West’s collaborative album, Watch the Throne.