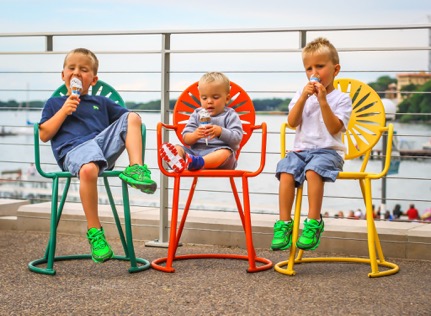 Since its emergence in 1928, the Memorial Union at the UW has been a spot for learning, growth and creativity. Overtime, Memorial Union has seen many changes— new restaurants, renovations, a range of student organizations and different directors.

One of the only constants throughout Memorial Union’s existence is its iconic terrace chairs, and the meaning they carry throughout not only campus, but also the city of Madison.

Mark Guthier, who has served as the Director of the Wisconsin Union since 2002, also believes the terrace chairs mean more than a place to sit.

“The terrace chairs are symbolic of spring, which also mean they’re an indication of the impending commencement. They represent a beginning and end. They represent a place where both two-year-olds and 92-year-olds can gather and enjoy Lake Mendota, and it serves as an equalizer on our campus.”

When Memorial Union opened, UW-Madison President Glenn Frank stated its purpose was to turn the university “from a house of learning into a home of learning.”

Union staff looked to the chairs located on the Lake Mendota Terrace to convey a relaxed environment. The Terrace was original furnished with large hickory chairs, which were popular during the 20th century and often found at summer resorts and lake homes. However, Wisconsin’s famously unforgiving winters proved to be too harsh for the wooden chairs and they were quickly retired.

By the 1930s, several versions of metal chairs were introduced to the Terrace. While these chairs proved to be durable, Memorial Union still faced many challenges regarding the chairs for the remainder of the 20th century. Many of the models used became too susceptible to rust, and the company responsible for the Terrace chairs closed in the 1970s, destroying the tooling they used to make the chairs.

While Memorial Union sought out other companies to make new chairs, the replacements were not durable enough to withstand heavy use or harsh weather. Finally, the Wisconsin Union established a partnership with Wisco Industries in 1981.

Located in Oregon, Wis., Wisco Industries copied one of the earliest models of the terrace chair and provided matching tables. The design, which is still being used today, features a sunburst on the back and seat of the chair. The Terrace chairs can be found in yellow, green and orange, as part of a request by the Wisconsin Union that the chairs represent the different seasons.

Nearly 40 years after the Wisconsin Union established a partnership with Wisco Industries, the main challenge the union has continuously faced is theft of the chairs.

“It’s become almost a rite of passage or this really iconic thing to do,” said UW-Madison Community Officer Barrett Erwin. “People are able to justify it by saying they’re just taking a piece of the Terrace with them, but it’s really no different than going into any store and walking out with their cash register.”

Each chair costs $250 to make. Six years ago, Memorial Union was losing around $55,000 a year due to stolen Terrace chairs shares former Community Officer Tricia Meinholz.

While the Wisconsin Union refuses to chain the chairs to the pavement during the day in order to ensure the Terrace remains an accessible and easy-going place for all, Meinholz introduced the idea of chaining the chairs down during the night, when most thefts occur. Additionally, every fall and spring, Meinholz includes a message in the University of Wisconsin Police Department e-letter Badger Beat reminding the community that the chairs are union property.

“We’ll put that article out and almost instantly get 10 or 15 anonymous tips about a stolen chair,” Meinholz said. “We’ll go make contact with them and let them know they can choose to return the chair or be charged with theft. A lot of times, the chairs belong to an old roommate or boyfriend from the ‘90s, and the ‘owner’ had no idea they were causing a problem.”

While fans of the Terrace chair are able to buy their own through the Wisconsin Union store, they are only able to purchase chairs in red and white. This helps officers identify a stolen chair when they see one in orange, yellow or green off of union property.

Community officers have developed creative ways to track down Terrace chairs. Erwin remembered a time when he followed a group of four boys with stolen chairs to their house, only to have them run away. He checked the names on the mailbox and looked them up in the student directory.

“I called their fathers and within 20 minutes they had returned the four I saw them stealing as well as eight more from previous attempts,” Erwin said.

The consequences of the chair theft show just how much the sunburst chairs affect the union experience.

Erwin claimed that chair thefts have “decreased dramatically” since Meinholz’s initiatives were put in place six years ago, which has allowed the Union to remain a spot on campus that focuses on student development, not regulatory policies.

“[The chairs} also symbolize everyone who visits Memorial Union, and that is what makes them so unique,” Wisconsin Union Communications Director Shauna Breneman said. “Sometimes it means a conversation with a great professor; sometimes it means reuniting with long lost friends.”

“The chairs are a symbol of all that. They’re as unique as every person’s individual union experience, of the people they’ve met and the memories they’ve made.”

The Consequences of a Stolen Chair

Fines for stolen chairs range from $180-$250, but the Community Officers for the University of Wisconsin Police Department are far more concerned with bringing the iconic chairs back to the Terrace than issuing out tickets.

Community Officer Tricia Meinholz shared that if someone cooperates and hands over the stolen chair without any trouble, she rarely issues a ticket or enforces the fine, explaining that her main goal is to maintain a strong relationship with Memorial Union and the Community.

Dana Jacobson, a senior at UW-Madison, had this experience. She stole a terrace chair with her roommates during the summer of 2016. This September, her and her roommates decided to display their chair on the balcony of their apartment. Within 12 hours, UWPD officers had arrived at her door with the intention of reclaiming the chair.

While Jacobson was questioned on how and when the chair was stolen, she was not issued a ticket or asked to pay a fine.

Meinholz hopes that through consistent communication she can stress the consequences of stolen Terrace chairs for the Madison community.

Each chair is $250 to make, so every time they lose a chair, that’s $250 out the door. This can impact the members because then member fees go up, the cost of food and beer goes up because they have to cover the cost somehow.”