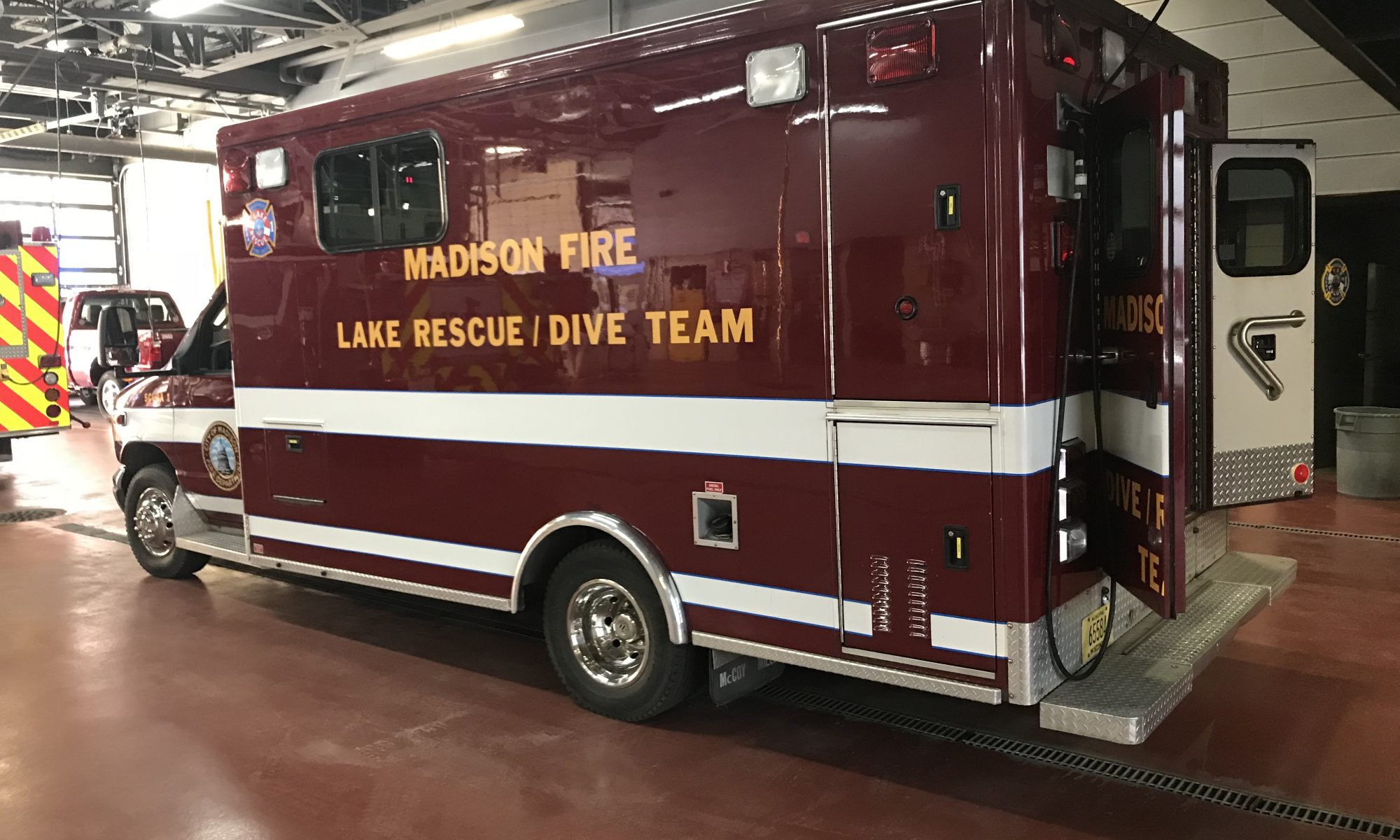 While spending a day on the waters of Lake Mendota is a leisurely occasion for most people, keeping the lakes in Madison safe is far from a day at the beach.

“You have to have a wide knowledge base of how to operate boats and ATVs, you have to know an awful lot about medical treatment, how to work with a bunch of different agencies like the [Department of Natural Resources], and you need to have a ton of experience in the outdoors,” Sgt. Tom Sankey said. Sankey, who leads the Dane County Sheriff’s Office Marine and Trail Enforcement Bureau, said safeguarding the lakes requires a year-round effort from his team, the Madison Fire Department Lake Rescue Team, the DNR Law Enforcement Bureau, and other agencies to communicate and divide the responsibilities of maintaining lake safety, from conducting rescues to promoting safety education.

For Fire Lieutenant Jeff Nadolny of the Lake Rescue Team, though his team’s mission is quite simple – making rescues on the lake – the preparation that goes into lake rescues is anything but simple.

Being an active member of the Lake Rescue Team requires completing intensive swimming and diving training, including a number of ice dives and night dives, Nadolny said. In addition to being very time consuming, Nadolny said ice diving can be particularly dangerous if done incorrectly.

“Ice diving is one of the most dangerous things we do as a rescue team,” Nadolny said. “When we’re ice diving, we’re always on a rope system, because you’d never find the hole [in the ice] again if you came off that rope.” Beyond rescue training, Nadolny said Lake Rescue Team members must be good communicators, adept problem-solvers and quick thinkers. As the only full-time lake rescue team in Dane County, the team must be prepared to respond to a variety of different situations.

“We average probably 30 calls a year that are lake rescue calls. Of those, some of them we’re diving for people, some are surface rescue, and quite a bit happen when the ice first starts to come on or off,” Nadolny said. “For anything we respond to, we just get there, assess the situation and make our best choice.”

When the Lake Rescue Team gets dispatched, the team activates a speedy plan of action, according to Nadolny.

After receiving a call, team members rush to their respective vehicles and start preparing on the drive to the scene.

From there, Nadolny said the response all depends on the situation and the team leader’s discretion.

According to Nadolny, team leaders must also decide when to conclude a rescue attempt.

Because the team’s mission is to make lake rescues, team leaders get to decide when a viable rescue attempt becomes a recovery effort, which would then become the responsibility of the Dane County Sheriff’s Office, Nadolny said.

“If it were a child, we would probably look as long as we could, but after 45 minutes to an hour, it’s probably not a rescue by then anyway,” Nadolny said. “We can’t spend six hours searching for someone when they’re obviously expired, because we have to be available as a rescue team if another water emergency came in.”

Although being the only full-time lake rescue team in Dane County can be strenuous and dangerous, Nadolny said the current balance of lake safety responsibilities is beneficial because it allows his team to focus on performing rescues.

Out on the water, Dane County and DNR officers patrol year-round to enforce boating and ATV regulations and stop accidents before they happen.

Though Sankey’s Marine and Trail team consists of only three members including himself, other Dane County and DNR officers join the team to ensure that at least four officers are out on the lakes at all times, Sankey said.

According to Sankey, his team’s primary goals are to identify and stop boating infractions and to educate people on how they can be safer while on the water.

“Enforcing boating infractions are the biggest goal, but we’ll also stop and just talk to people, see how they’re doing, and give them some pointers if they’re not too experienced,” Sankey said. Capt. April Dombrowski, section chief for the Madison DNR office, said the typical activities of law enforcement on the water include ensuring that the boats on the water are safe, that people are following boating laws like using navigation lights at night, and that people are not driving under the influence.

Dombrowski said that the partnership between the Marine and Trail team and Madison DNR has been successful because the agencies share the same goals.

“There’s a lot of activity out on those lakes, specifically Lake Mendota and Monona,” Dombrowski said. “We’re only a couple of officers, so we can’t be everywhere at once, but working with the Dane County Sheriff’s Office is nice because they also provide that effort. We have the same goals: to keep people safe and to have a presence out there.”

In addition to communicating who is patrolling where, Sankey said the two bureaus also discuss what to do in specific circumstances when an officer must use discretion.

“If we’re not certain on a certain violation, we’ll communicate with [Madison DNR], work on separate areas, and help each other out,” Sankey said.

The reciprocal partnership of the two bureaus is further strengthened by DNR funding for the Marine and Trail team. According to Dombrowski, the state of Wisconsin reimburses the Dane County Sheriff’s Office for their lake safety efforts, which largely supports their lake patrol functions.

Having strong communication and shared goals allows both departments to patrol the lakes 24 hours a day, every day of the year.

According to Dombrowski, the DNR oversees boat safety education classes, making sure that enough are offered and that they meet DNR requirements. The Dane County Sheriff’s Office offers boat and ATV classes as well.

“If there’s an upcoming weekend of a fishing opener, or Memorial Day weekend where we know there’s going to be a lot of people out on the water, we take those opportunities to educate the public through social media,” Dombrowski said. Additionally, the DNR lists safety information for a variety of lake activities on its website, such as ice safety tips, information about hypothermia and water quality FAQs.

Still, Dombrowski said the number one safety tip that people fail to abide by is perhaps the simplest: wearing a life jacket.

“We’re just trying to get the word out that wearing a life jacket should be like when you get in a vehicle and you put your seatbelt on — It goes hand-in-hand,” Dombrowski said. “If we just had folks do that when we do have incidents, maybe they wouldn’t be as tragic.”

With multiple agencies overseeing the lakes in Madison, lake-goers can be sure their experience on the water is safe year-round.

Although the agencies protecting the lakes in Madison try to be prepared for anything, Lt. Jared Nadolny of the Lake Rescue Team said some rescue calls are so unusual that the team will never forget them.

Nadolny said one call in particular sticks out because of the line a woman in distress yelled at the scene.

“A woman drove her car into the water, screamed ‘I don’t want to die!,’ and then swam out of the water herself,” Nadolny said.

According to Nadolny, although the woman rescued herself by swimming to shore, the rescue team still had to send in divers to search the car and to hook it up to a tow truck.

The team had to make a more dangerous rescue attempt when a large fire caused several people to jump from their boat.

“We had a ski boat carrying about 50 gallons of fuel, and the engine compartment just lit on fire. There were probably six or seven people on the boat, and they all jumped in the water,” Nadolny said. “So, there were several rescues that had to be made and a giant fire.”

Marine and Trail Enforcement Sgt. Tom Sankey said the weirdest call he ever received was in response to a mentally unstable man damaging boats.

“Last year, there was a person going through a mental breakdown, and he was tearing apart some boats that were up on a pier,” Sankey said. “He was totally naked, ripping his hair out in clumps. He was so out of it mentally that he didn’t know what was going on.”

Though cars in the water and giant boat fires are rare, Madison’s lake law enforcement agencies know how to respond if unusual events like these ever occur again.