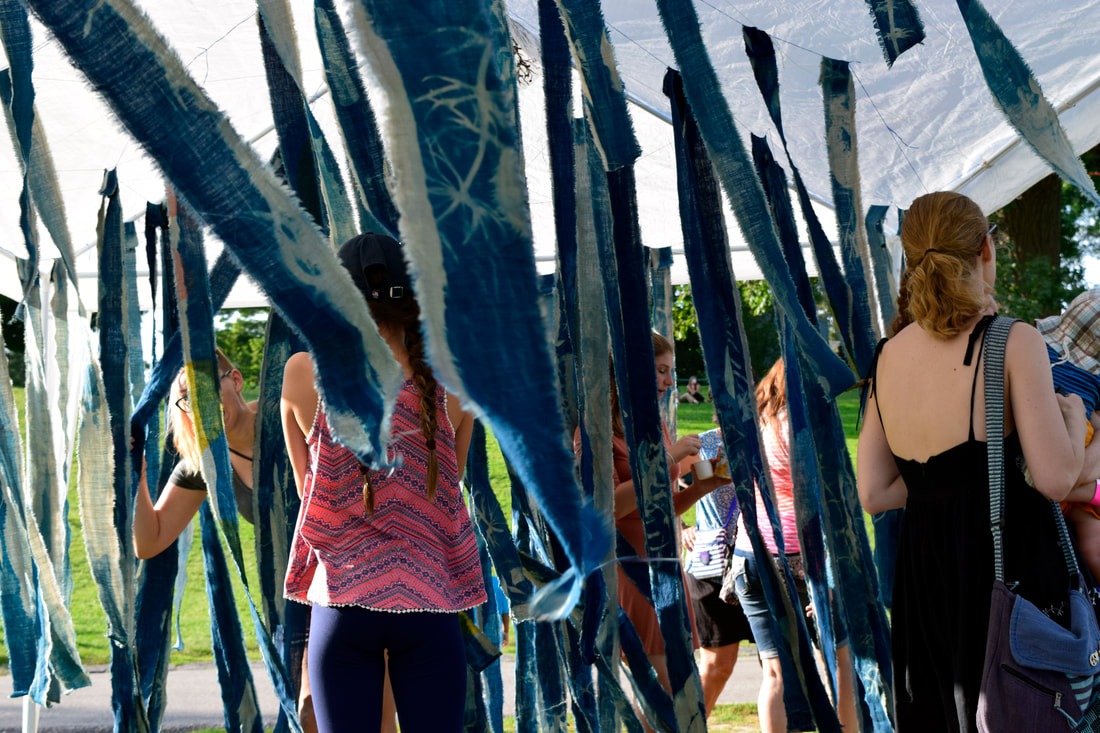 While the lakes provide the community an opportunity to boat and dip their toes in, many may not realize the influence they have on the city’s art and music communities. Artists, architects  and musicians alike have utilized Madison’s lakes as a platform for creative exploration and to showcase their art.

Without the lakes, some of Madison’s most iconic installations and events would cease to exist.

In the dead of winter, one can see a mirage marching penguins and swimming dinosaurs on a barren and frozen Lake Monona horizon.  It appears bizarre, but the vision is a well anticipated Madison tradition. For Browning, a frozen lake, devoid of life, is the ideal canvas to share his creations.

“When the lake is frozen, the only thing you got are the ice fishermen and an occasional ice boat that goes by.  I always thought it needed more, so I decorate that part,” Browning said.

Browning makes the cold trek to down to Lake Monona and John Nolen Drive to install his art each year.  He takes pride in evoking public curiosity and drawing attention toward the lakes.

“Nobody knew who was doing it. It was a story of  ‘Who did that come from? Who did it?’ How am I going to find out the answers to these questions?’ And for years, you couldn’t! ” said Browning.

According to the Isthmus, in the past, Browning has received 5 BLINK grants from the Madison’s Art Commission to fund his temporary public art.  The community support and admiration, however, has prevented Browning from reapplying. Currently, the local Home Depot and paint store, Hallman Lindsay, donate his supplies.

In the future, Browning hopes to collaborate with local daycare centers and elementary schools in enabling children to have a say in the art installations they see on the lake.

“In the winter,  I want people to know that there are things that you can do with that big piece of frozen ice out there, that’s fun, interesting and enjoyable,” Browning said.

Community spirit and support for public art fuels Browning’s motivation to continue the annual installations.  For other Madison artists, inspiration stems from the lakes’ ecological and environmental value.

In February the James Watrous Gallery at the Overture Center of Arts, hosted “Future Possible: Imaging Madison”, an exhibition showcasing work from local artists, designers and architects who’ve envisioned the city of Madison in 75 years.

Among both abstract and literal pieces, all entailed a key feature: the lakes. Wineburg described the inspiration for his work as a “psycho-geographic mixing station”.  He is moved both by the environment and how people interact with it.

“Everybody has similar thoughts floating around.  Outright, we should probably be thinking about taking better care of this place,” Wineberg said. In a piece called “Bottoms Up”, Wineberg created an interactive piece to simulate the experience of wading in over vegetated lake.  It exemplified the repercussions of the agricultural runoff entering Madison’s lakes. Photo by Jeremy Wineberg.

For his “Future Impossible: Imaging Madison” piece,  Wineberg drew inspiration from Yahara 2070, a series of projected future scenarios of Madison’s lakes organized and researched through the UW Madison Limnology Department.

“It allows you to think about the lakes not just as something that you drive by and that you’re kids can swim in,” Wineberg said.

While Wineberg’s piece used abstract formats to portray a possible future scenario of Madison’s Lakes, others pieces in the Watrous Gallery exhibit exemplified the lakes’ future in a literal format. Edward Linville, a Madisonian architect for 40 years, built a model to showcase his vision in a cleaner and more accessible lake environment. He stressed the lakes will not remain a constant landmark for the city in 75 years unless they are taken care of.

“They are not static; they are an evolutionary system. How we care for the lakes is going to be the way they have a chance of surviving in this form. We have to help steward it ,” Linville said.

As a member of Madison Design Professionals, Linville is currently proposing the city implements an overhead park on top of the Monona Convention Center. “The Future Impossible: Imaging Madison” exhibit enabled Linville to share his expanded vision.

His model includes a chain of pavilions along the lakes as a place for the public to socialize and congregate.  The pavilions serve as stations for public water taxis, while simultaneously housing a vast water filtration system to ensure run-off water returning to the lakes is cleaned.

Although the lakes serve an integral role in the city’s existence, Linville believes they are not easily accessible to everyone in the community.

Madison’s lakes provide the city community with one of its most iconic and reputable summer pastimes: music on the water.   For musicians and bands, Madison’s lakes offer a quintessential performance arena: The Terrace. Music on the Memorial Union Terrace. Photo by Bobby Vanderwist.

Among the various of entertainment sites around Lake Mendota and Monona, indubitably the Memorial Union Terrace stands as the city’s trademark.

Before the renovation, the smaller Terrace stage was positioned far from the lake with its back toward  the Memorial Union. Ralph Russo, Director of the Wisconsin Union Theater and employee of the Union since 1984, explained how students initiated a monumental change.

“They [students] decided one Friday afternoon, that they were going to just move the stage. So they just picked it up and moved it down there,” Russo said.

“It stayed there every since.  A few years later we got a cover for it and that’s when the music really started to take off.”

In the few years to follow, Russo and the student programming committee started a concert series, called “Hot Summer Nights”.   With the Lake Mendota backdrop and a larger booking budget, the series instigated the the Terrace’s reputation, grabbing the attention of regional and national touring acts.

Russo explained that unique combination of its lake setting, large outdoor capacity and free student programming enabled the Terrace to become a desirable platform for up and coming artists.

“As opposed to big stages stuck on streets, you’re looking out on sail boats and setting suns and stars coming up,”  Russo said. “And because it’s free, they get to play to a lot of people that normally wouldn’t pay to see them. So they are building their audience base .”

Some promoters will not book a band unless they played at the Terrace, making the Lake Mendota site an ultimate stepping stone for emerging musicians on pursuit.  Public accessibility and venue size has also influenced the type of music booked.

Courtney Byelich, advisor to the WUD Music committee, explained that Terrace programming differs from other Union venues.

“When you’re booking for that space and the audience doesn’t know what they’re there for, we try to make them stay,” Byelich said.  “We try to win people over to bands, rather than alienate them by the bands that we book.”

Despite the uncontrollable repercussions of booking on the lake, such as weather, the close proximity to the lake has proven to be the ultimate venue for musicians, agents and audience viewers alike.  The lake has built a community of music lovers of native and non-native to Madison.

It’s places like the Terrace, where the lake unveils its true purpose: a stage for the arts.

The Statue of Liberty - A Prankster’s First Art Installation Imagine looking out on a frozen Lake Mendota and seeing The Statue of Liberty’s crown and torche peering out of the ice.

Today it would be perceived as scene straight out of the 2004 film The Day After Tomorrow, but in 1979 it was simply one of the greatest college student pranks. It made national headlines.

Timothy Browning, locally renowned his the annual art installations on Lake Monona, was a member of the Pail and Shovel Party, responsible for initiating UW Madison’s historical pranks.

While he claims he didn’t physically assist with the installation of Lake Mendota Statue of Liberty, the public still inquires about his role in participating in the historical prank.

“ I was just one of the guys who paid 2 bucks to join the party and whatever I could do, I did,” Browning said.

In 1979, little did he know that the major prank installation on the frozen Lake Mendota, would set the precedent for his current artist endeavors on a frozen Lake Monona.