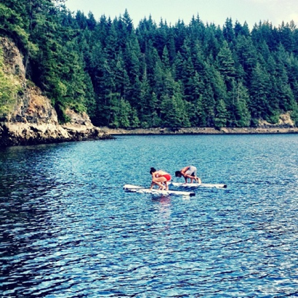 Breathe in. Exhale out. Deep breath in. And let it out.

The world is a bright orange behind my closed eyelids, swells of water trickle past me on their own journeys.

A warm feeling touches my face and is swept away by a gentle breeze as I shift into a Downward Facing Dog position. A bit unstable, I begin to lose my balance.

Trying to regain my stability, I begin to notice drops of sweat run down my face, as though racing to some undetermined finish line. I start anticipating the next position I will be led into when my muscles shake from the strain.

The sudden immersion into the icy cold body of Lake Mendota breaks me out of my trance. I swim back to the water’s surface and take greedy gulps of air. Treading water, I look around desperately for my paddleboard but instead find the faces of my fellow classmates trying to hide their smirks or full-on laughing at my clumsiness.

I find the board a few yards away and try not to attract anymore unwanted attention as I make my way back to it. Once there, I heave myself up onto the board and try to calm my racing heart from the unexpected scare that just occurred.

Still breathing heavily, I try to focus on the sounds of the water below me to bring myself back to the tranquil state I had previously been in.

That is until I hear an unexpected “SPLASH!” to my right and open my eyes to see that we have lost yet another tribute in our efforts to find peace within ourselves in a serene, invigorating environment.

This rigorous activity, that is dependent on balance and core strength, is stand-up paddleboard (SUP) yoga. This form of yoga adds elements of both fun and control as the yogis must find their centers in order to stay balanced on their paddleboard that is in the middle of a body of water. People all over the world practice this form of art on bodies of water during the warmer months of the year as it becomes more and more popular across the globe. The University of Wisconsin-Madison is just one of the many places in which yogis can test their strength and steadiness in SUP yoga.

There has been a recent growth in interest for the water workout as an estimated 1.2 million Americans tried SUP yoga in 2011, an increase of 18 percent from 2010, according to a Reuters article. While this is a small percentage of the estimated 21 million U.S. adults that practice yoga yearly, according to the National Center for Complementary and Integrative Health, the number of SUP yogis is steadily growing as the trend spreads.

Yoga has been studied and practiced as early as 2700 BCE, according to the Ministry of External Affairs in India, but the craze has been modified as the centuries have passed for new environments as well as for increasing difficulty of the positions.

UW-Madison senior Hannah Pelfresne was one of the many first-time SUP yogis that share a similarly unstable experience as she tried the water-based workout during a family vacation in Hawaii.

During her senior year spring break, when Pelfresne and her family narrowed down their list of potential activities, SUP yoga made their finalized list as Pelfresne, a veteran yogi, was adamant about testing out her skills in this difficult form of yoga.

A few days into their stay, they ventured out into the Pacific Ocean with paddleboards and a yoga instructor in tow. Once they had made their way out into the water, their leader began to instruct them to contort their bodies in various ways without falling off the board and into the water.

“The waves were quite big that day and my mom and sister got tossed by a wave trying to bring their boards out,” Pelfresne said. “It was a funny situation that [the instructor said] we were not allowed to laugh at.”

In addition to chuckling at the sight of their family members falling off their boards, Pelfresne also mentioned that after the class was done, she and her brother decided to paddle out further into the ocean and came within 150 yards of a whale.

Numerous other yogis that have attempted SUP yoga can tell you that falling is a common occurrence for everyone from first-timers to seasoned professional instructors.

Eva Wieland, a junior at UW-Madison, is an instructor of indoor and SUP yoga for the UW-Madison recreational facilities and came to realize that falling off the paddleboard during SUP yoga is half the fun while experimenting with the boundaries of her balance.

Wieland further stated that during a SUP class you “have to be ready for and open to the unpredictable,” such as a school of fish creating a ruckus under your board or a windy day where the waves create an extra challenge for your balance.

“[Indoor and SUP yoga are] more similar than you would think,” Wieland said. “There is the same goal of connecting the mind to the body. Although strength and flexibility intentions are present in both, the balance challenge of poses become a larger focus on the board. Because there are external elements, SUP practice can often be unpredictable; there is often a more carefree, fun energy in classes.”

As Wieland mentioned, there are numerous similarities between indoor forms of yoga, such as hot yoga, and SUP yoga. Many who do one form often decide to alternate between the different variations of the art that are offered.

The SUP yoga program through the Wisconsin Union originally started in the summer of 2016, according to Wieland, as the Outdoor UW section of Memorial Union realized that they could be utilizing their paddleboards in new ways and hired their first SUP yoga instructors. As the program is relatively new, and the only SUP yoga program in the UW-Madison area, they are eager to grow their program as new and veteran yogis try the water-based workout.

UW-Madison senior Hannah Rosenson is one of these yogis who love experimenting with different adaptations of her favorite form of exercise. While she originally started doing SUP yoga as an activity to entertain her mother during her visits, Rosenson soon found that both of these forms of yoga can be fun and engaging.

SUP yoga is offered through the UW-Madison Wisconsin Union during the summer months, beginning in June, and will hold classes in front of the Terrace Thursday- Sunday mornings in the upcoming 2018 Summer sessions.

Here is a link to their website with their schedule and more information.

Yoga has been around for centuries, dating back to 2700 BCE India, but has since been everchanging since its creation. Thousands of years ago, before religions and belief systems were born, the “science of yoga” was practiced in the Himalayas and spread through seven sages to different parts of the world, as stated by to the Ministry of External Affairs­ in India.

The practices of current yogis are no longer confined to India, or even land, as it was when it was first created and spread. Today, people experiment with new forms of the craft as well as new locations.

Stand-up paddleboard (SUP) yoga is a more recent innovation in the trend that involves yogis to practice their art on a paddleboard in a body of water. This modification to the traditional land-based settings increases the difficulty tenfold as balancing on water comes with its own unique set of challenges.