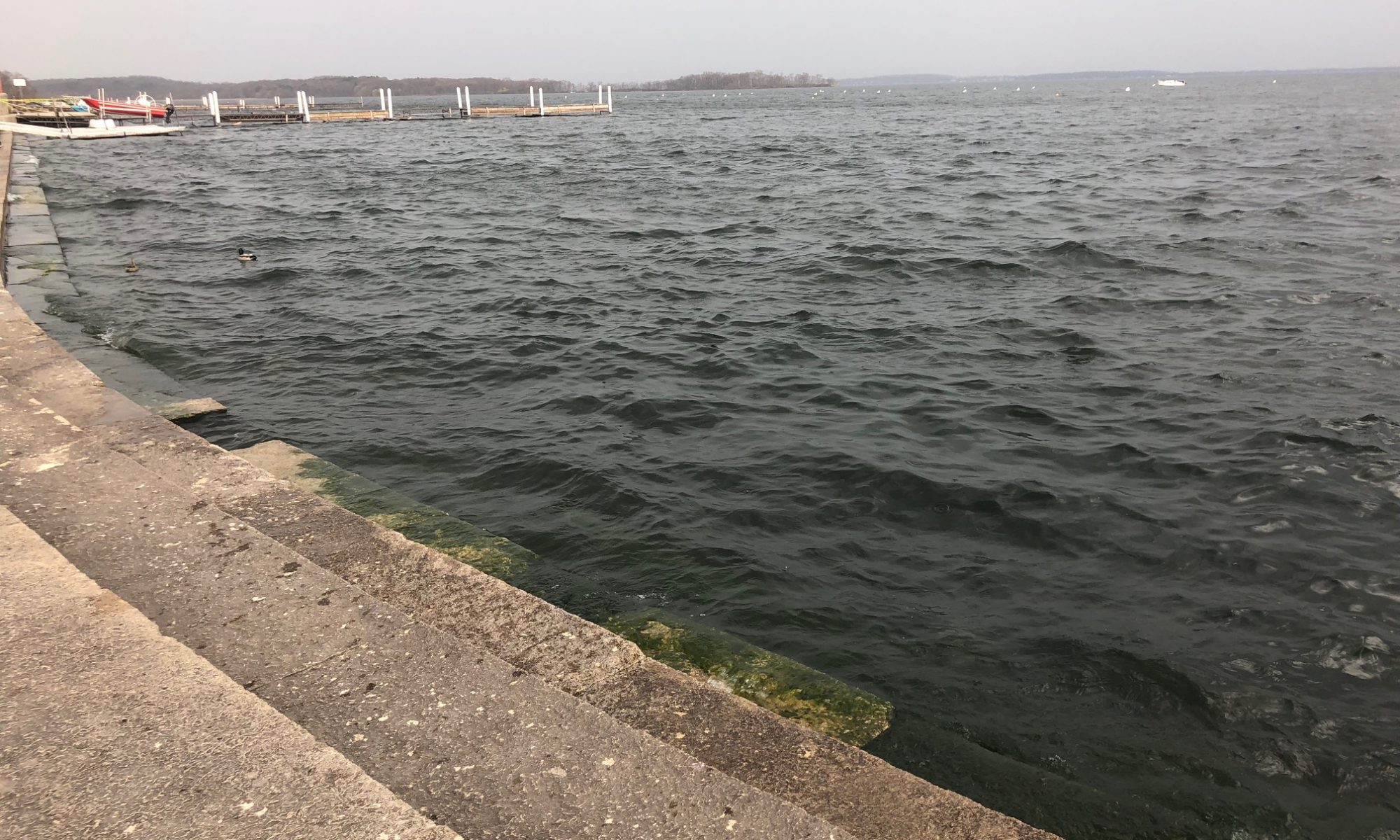 For most people, when considering a choice between beautiful flowers or dead dogs, it would be a simple decision.

However, in Madison and across the globe, people’s actions show the opposite — creating conditions in our lakes that harm not only our furry companions, but other humans as well.

Man-made conditions have led to a rise in blooms of cyanobacteria, otherwise known as blue-green algae, which release toxins into the water. These toxins can have adverse effects for all forms of life, and deteriorate the water quality of our lakes.

Professor Linda Graham of the UW-Madison Botany Department has devoted her time to researching both beneficial and harmful types of algae. However, Graham and her graduate students have a difficult time conducting research on water that has already been essentially destroyed by human impact.

“Sometimes I go to the ends of the earth to find aquatic systems that are less impacted by humans,” Graham said. “So far I haven’t found anything that humans haven’t come close to seriously wrecking.”

Even when Graham visited remote areas of Patagonia, there were still signs near ponds advising not to touch the water due to toxic cyanobacteria blooms — the same type of blooms found in Madison waters.

Unfortunately, the effects are nearly irreversible. But researchers, legislators and local community members are still working towards alleviating the ill effects of this problem humans created.

What are blue-green algae?

The term “algae” describes photosynthetic organisms that mostly live in aquatic systems, which are essential in creating oxygen in aquatic habitats.

Cyanobacteria, or blue-green algae, are different from most other forms of algae, in that they are actually a type of bacteria, Graham said. Because blue-green algae’s cell structure appears closer to bacteria than a plant cell, it functions very differently in our water.

Blue-green algae blooms can be identified visually as large scummy mats or smaller streaks on the surface of lakes or other bodies of water, according to Public Health Madison & Dane County’s brochure on blue-green algae.

“And even if you don’t see the cyanobacteria, the toxins can be there, because rain might disseminate floating cyanobacterial blooms, but the toxins are tough,” Graham said.

The hundreds of different types of toxins produced by these algae blooms can survive for weeks or even months in the water, Graham said.

Most forms of algae in Madison’s bodies of water are harmless and even beneficial, such as green algae. However, cyanobacteria ecologically don’t belong in freshwater bodies of water, like our lakes, but have grown as a result of human impact.

“If humans add too much fertilizer to lakes and coastal oceans that causes weedy organisms to grow faster. Just like weeds in your garden use the rich garden soil to grow,” Graham said. “You may not want them to grow, but they grow anyways, because you have made life so wonderful for them.”

Humans alone are rapidly deteriorating the lakes by introducing chemicals to the water from yards and farm fields, creating nutrient rich water that encourages the growth of harmful cyanobacteria.

If humans didn’t inhabit this area, there would be no blue-green algae present in Wisconsin’s lakes.

“We are the only reason why they’re a problem in the environment,” Graham said.

Without wetland or vegetation barriers around lakes and ponds, excess chemicals from fertilizer flow directly into the water.

There is a strong correlation between water with high chemical content and its proximity to agricultural activity, according to Public Health Madison & Dane County’s water quality report from July 2017. The eastern portion of Dane County, as well as north of Lake Mendota and some south central areas of the county, contain both the highest density of land used for agriculture and highest levels of nitrate concentrations.

Another contributing problem is the Wisconsin GOP pulling back environmental regulations to benefit larger corporations.

One example of this was when the state of Wisconsin gave the Taiwan-based electronics company, Foxconn, an exemption from certain waterway requirements in September 2017, according to the Milwaukee Journal Sentinel.

Along with creating minimal environmental requirements for the preservation of waterways and wetlands, the state also agreed not to require the company to submit environmental impact analysis reports as part of the $3 billion incentive package.

For Bob Harrison, a member of Badger Fly Fishers and the Southern Wisconsin chapter of Trout Unlimited, the state’s relaxed stance towards environmental regulations sets back the conservation efforts made by local organizations.

“It’s trying to work with the business, not necessarily in opposition to the business, but I suspect…our current state administration is not very sympathetic to air and water quality standards,” Harrison said. “So it’s just an uphill battle and an on-going fight to make sure that our voices are heard, if at all possible.”

Without strict regulation and enforcement by the state, little can be done to combat these toxic blooms on a larger scale, Harrison said.

The cyanobacteria present in our lakes can have detrimental outcomes for both human health and utility.

In larger bodies of water, like Lake Mendota, the toxins often get diluted — sometimes lessening the possible health effects for humans. However, the danger still largely affects dogs and other animals, because their smaller size makes them more susceptible to the toxins.

“When [dogs] get into the lake, they get covered with the cyanobacterial blooms, and then, you know, what dogs do when they get out, they lick themselves and they get this really concentrated dose of the toxin,” Graham said. “They’re incredibly sensitive”

Toxins in the lakes can still negatively impact human health, though. In less extreme cases, blue-green algae can cause stomach pain and skin irritation in humans, Graham said.

However, in larger doses, the toxins from cyanobacterial blooms can damage the liver, nervous system and respiratory system. Humans can experience symptoms such as fever, diarrhea, body pain, difficulty breathing and even death, according to the brochure from Public Health Madison & Dane County.

“Madison is famous all over the world, because it’s the one place where we have this really strong evidence of a connection between human death and cyanobacterial blooms,” Graham said.

In 2002, a Cottage Grove teenager went swimming in a small fenced-off pond at a golf course. The pond, located on a heavily fertilized lot, contained a highly concentrated amount of the toxins due to fertilizer run-off. Due to the highly concentrated chemicals in the small pond, his upper respiratory system paralyzed almost immediately, Graham said.

The coroner determined in 2003 that the cause of 17-year-old Dane Rogers’ death was the blue-green algae, according to the Milwaukee Journal Sentinel. This proved to the community for the first time that these toxins could become fatal in high enough doses.

What We Can Do

We are past the point of lake preservation, Graham said.

However, people like Graham are working towards new ways of improving the water quality of our lakes through any methods they can.

While human impact has been detrimental to Madison’s waters, there are ways that individuals can lessen the impact on a smaller scale.

For landowners with small ponds, experts advise placing plants around the edges of the water in order to catch excess run-off.

“Basically a landowner who is willing to plant beautiful, decorative plants around their pond, around the edges, end up with pond water that’s perfectly normal,” Graham said. “There might be some algae in it, that’s normal, but there’s none of the harmful ones”

Graham said that by adding additional chemicals in attempts to kill blooms, individuals would only exacerbate the issue. When a blue-green algae bloom is treated with chemicals, the bloom itself will dissipate and release toxins into the water as the bloom itself dies, according to Public Health Madison & Dane County’s brochure.

Another way individuals can help alleviate the problem is through staying informed, and educating others.

Community organizations, like Badger Fly Fishers, organize educational and fundraising events for conservation issues, including the prevention of chemical run-offs into bodies of water. The organization also advises their members and other individuals in the community to get involved in politics and voice their opinions to their government representatives.

“We try to make our members aware of it so they can, in turn, contact their congress people and let them know our feeling about it,” Harrison said.

For the Badger Fly Fishers and others who fish primarily in moving water, like streams and rivers, they are often the first line of defense for Madison’s watersheds.

Because of this, members of the organization feel a sense of duty to participate in improving water quality through individual conservation efforts, as well as political action.

In order for individuals to keep themselves, as well as their families and pets safe from toxins, it is vital to steer clear of water with highly visible algae blooms. Experts also advise for lake lovers to stay up-to-date on the levels of toxins in each body of water, by checking news reports regularly.

The toxic blue-green algae are just one noticeable part of the damage humans are rapidly bringing upon Madison’s aquatic environment. The algae reveal a shocking truth about the noticeable and catastrophic effects pollution can make.

“A very wise person once said we don’t leave our natural resources to our children, we borrow it from them,” Harrison said.

Producing hundreds of different kinds of toxins, cyanobacteria threaten the health of humans and animals alike.

Individuals should avoid entering water when there are visible blue-green algae blooms, but still understand that clear water that is free of algae can still contain toxic properties from dissipated blooms.

People with weak immune systems, like children, may be more susceptible to symptoms. If an individual is experiencing symptoms, such as fever, body pain, stomach aches or headaches, they should contact a medical professional immediately.

Contrary to popular belief, chemicals should not be added to bodies of water in attempts to kill toxic algae blooms. These chemicals would simply force the algal blooms to release toxins into the water, while simultaneously harming helpful types of algae in the process.

Instead, blue-green algae blooms should be left to dissipate on their own.

Lake lovers should also avoid activities like water skiing over patches of blue-green algae, because it can force harmful toxins into the air.

Madison’s lakes are home to an abundance of recreational activities. While the existence of toxic algae should concern everyone, it shouldn’t stop residents from taking advantage of Madison’s various lakes.