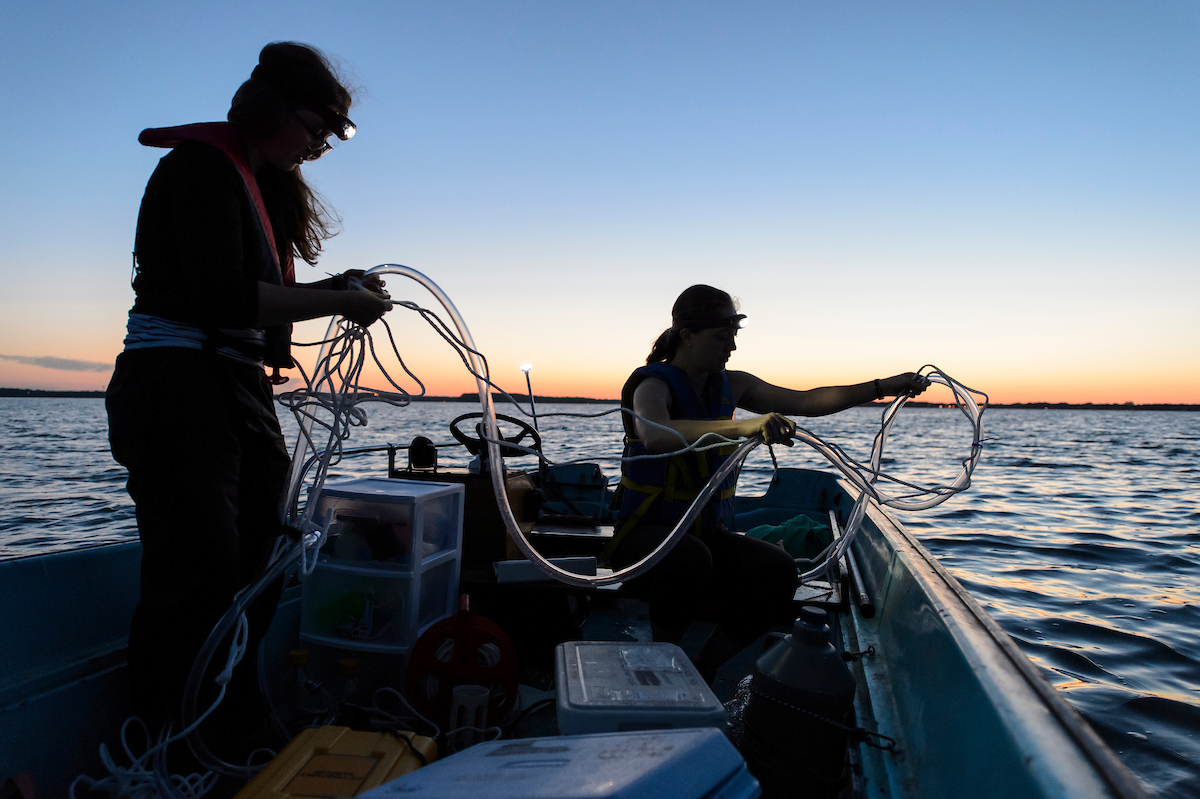 When settlers first arrived in what is now Madison, Wisconsin, they described crystal clear lakes in an idyllic setting.

In fact, James Duane Doty, a territorial judge and land speculator, liked the land so much that he bought 1,200 acres for the small amount of $1,500 and plotted a grid of streets between two pristine lakes in 1829.

“That obviously has not been the case for a long time,” said Adam Hinterthuer, communications and outreach coordinator for the UW-Madison Center for Limnology (CFL).

Today, that land is urbanized and packed tight with buildings, including those of the state government and the vast UW-Madison campus. Furthermore, the streets are filled with cars and buses that produce carbon emissions. The once-pristine lakes have attracted lots of development over the past couple of centuries, which has led to poorer water quality of Madison’s once-pristine lakes.

For those who don’t know, limnology is the study of lakes and other bodies of freshwater. The CFL was established at UW-Madison in 1982 after an already-impressive history of limnology research at the university led by Edward A. Birge and Chancey Juday, who are both credited as pioneers in the field.

With such a storied history, UW-Madison is considered to be the birthplace of limnology in North America. Arthur Hasler, a former student of Juday, would later widen the scope of the work of Birge and Juday (and the CFL) by bringing with him new experimental approaches, including manipulation of entire lakes. The CFL’s lab located along Lake Mendota is named after Hasler.

According to Hinterthuer, the decrease in water quality of Madison’s lakes is the result of agriculture and industry, both of which have contributed to an overall decline in water clarity. Hinterthuer used water clarity and water quality interchangeably, since measuring how far one can see down into the water is a common measure of its overall quality.

Although Hinterthuer talked about the water quality of Lake Mendota, he noted that whatever happens there flows down to the other Madison area lakes (i.e., Monona, Wingra, Waubesa and Kegonsa). Mendota is the most studied of the Madison area lakes.

The issue of Lake Mendota’s water quality has been studied extensively over the past several decades, according to Hinterthuer, and biological controls (i.e., the introduction of natural enemies or predators to an environment, in this case Lake Mendota) have served as successful solutions. In fact, Lake Mendota has been subject to several experiments to improve water quality.

In 1987, just five years after its opening, the CFL teamed up with the Wisconsin Department of Natural Resources (DNR) to control the growing population of algae in Lake Mendota by introducing walleye, which are large consumers of algae, according to Hinterthuer. A species of fish native to Canada and the northern U.S., walleye are also popular among recreational fishermen.

As a result, Lake Mendota gained a meter of water quality, meaning one could see an additional meter further through the water. However, this biological control did not address the issue of nutrients–increased levels of phosphorus in the lake–which created the algae problem in the first place.

According to Hinterthuer, this solution worked for some time until an invasive plankton species, Bythotrephes longimanus, or more commonly known as spiny water flea, was discovered in 2009. Spiny water flea, which are native to Russian lakes, love to eat the native species of plankton in Madison’s lakes (Daphnia pulicaria), which themselves are large consumers of algae. Since the invasive species ate the native, algae-consuming species, algae growth increased, and the lake lost that meter of water quality gained from the previous experiment.

The discovery of spiny water flea in Lake Mendota was the result of an undergraduate course at UW-Madison: Zoology 316: Limnology-Conservation of Aquatic Resources, an introductory limnology course. In fact, that same undergraduate lab would make another important discovery just six years later.

In 2015, students discovered zebra mussels in Lake Mendota, which are filter feeders that filter out all of the algae from the lake, according to Hinterthuer. While this seemed like a step in the right direction, this has since opened the door for blue-green algae to grow, which Hinterthuer said could be a trend to poorer water quality.

According to the DNR, blue-green algae grows in water that is warm and enriched with nutrients like phosphorus, levels of which have increased in Lake Mendota. Blue-green algae can also grow very quickly and is buoyant, which means it forms scum layers or floating mats at the surface of the lake.

According to Hinterthuer, the CFL is presently concerned with zebra mussels and the subsequent blue-green algae that grows, given that it represents a change of the entire food web of Lake Mendota.

There’s also the issue of nutrients gravitating toward the bottom of the lake, a process known as eutrophication, so more life exists at those depths. According to Hinterthuer, the result is an aesthetic hazard that also results in an unpleasant odor.

Interestingly, 2012 represented a really good year for water quality in Lake Mendota, according to Hinterthuer. Wisconsin experienced a drought during this time, which meant less phosphorus was deposited into the lake due to a lack of spring storms.

Manure digesters, which can be found all across Wisconsin, turn manure, specifically the methane gas in manure, into renewable natural gas. These also help with phosphorus runoff into area lakes, including those in Madison.

This is just one solution being considered to counteract the effects of algae and other contributors to poor water quality. This is important given that the lakes represent such an important ecosystem and an iconic piece of Madison’s identity in terms of recreation. Perhaps, this undergraduate class at UW-Madison will come up with the next cutting-edge solution.

Yahara Pride Farms (YPF) was founded in 2011 in partnership with the Clean Lakes Alliance and is comprised of area farmers, agronomists and businessmen who are looking for ways to improve and protect the area’s land and water. Specifically, the farmer-led non-profit organization is developing solutions to manage phosphorus on farms given its negative impact on water quality, according to the organization’s website. YPF’s focus also includes manure management and other nutrient management programs like cover crops and strip tillage, both strategies that maintain soil nutrition.

According to their website, the non-profit has grown to 72 members in the area. In 2013, YPF implemented a Farm Certification Program to recognize farmers for excellent stewardship. Furthermore, YPF educates farmers on best practices, so they can meet the guidelines to become certified. The organization also hosts an annual educational Ag Innovation Days, which includes various demonstrations of conservation measures and opportunities to purchase equipment, which is available through a cost-share program.