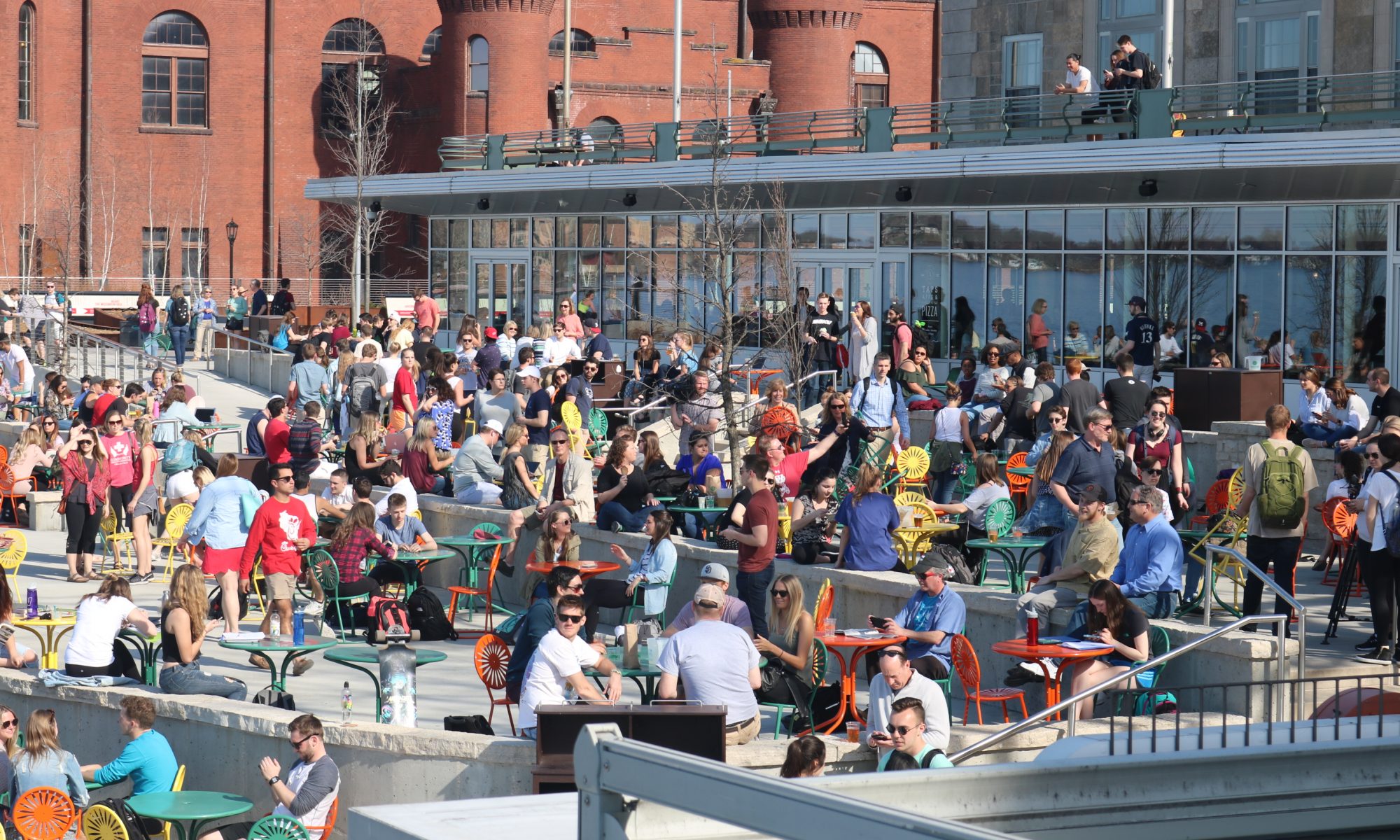 The Terrace at Memorial Union offers nearly everything to help people make wonderful summer memories — brats fresh off the grill paired with a hearty beer or cold soda, a movie with friends to cap off a great weekend. and summer concerts shared with friends new and old as the sun sets on beautiful Lake Mendota. You can even grab classic Babcock Hall ice cream at the Terrace to cool down any summer day.

The Terrace at Memorial Union seems to have thought of everything to make summers in Madison extraordinary.

The brats and sodas may be gone in a matter of minutes after customers receive them, but it took months of planning to ensure Terrace goers could savor along the shores of Lake Mendota.

All of this happens way before those customers even thought of ordering that food.

The first image which usually comes to mind when thinking of the Terrace is the iconic sunburst chairs. Thousands of people use them every summer but may not realize the time and effort that goes into making sure they are ready to go for the season.

After months of snow, the sunburst e chairs returned to the Terrace on April 24 after months of planning, according to a news release. Students and community members were able to grab the chairs and set them at the empty tables at Memorial Union.

Breneman said they started planning for the 2018 Terrace season in November 2017.

They had to coordinate repairs and painting for some of the furniture before the season started, according to Joel Gerrits, project engineer for the Wisconsin Union. They also had to work with movers and Terrace staff to make sure everything was good to go before they brought the chairs to the Terrace and let the community set them up. Breneman said three years ago they began letting community members set up the chairs for Terrace season. This planning takes dozens of hours and goes fairly smooth, Gerrits said. The weather is the biggest uncertainty problem in the equation since they have to plan everything far enough ahead to ensure the dates and times work for the group of people in charge of setting up the Terrace, including facilities and the movers.

Much of the furniture is already mapped out before the season which makes everything easier, but the weather can throw a wrench in the plans, Gerrits said.

“We’ve been like two weeks out scheduling [furniture moving] at least and then the weather kept being the problem,” Gerrits said. “Outside of that it’s pretty smooth.”

In the off season, Gerrit said he doesn’t think about how much the Terrace means to people.

“When it’s out there and you know how big it is to everybody you start thinking about it, ‘Yeah, you know that is kind of a big deal’,” Gerrit said.

The Terrace offers much more than just chairs to students, community members and visitors.

Hundreds of hours go into the planning of film and music events by the Wisconsin Union Directorate Film and Music programs before people sit down with their friends and family to enjoy a summer evening on the Terrace.

The summer coordinator begins planning events for WUD Film shortly after spring break, WUD Film Director Sarah Sapiro said. They begin by discussing general ideas and narrowing it down to themes and titles they may be interested in showing at the Terrace.

“It’s a whole mess of like let’s just name like 50 titles and whittle it down and try to figure out what we want to show,” Sapiro said. WUD Film works mainly with two distributors to get the films for their events, but there are some exceptions for things like smaller movies, Sapiro said.

She said the goal of these events is to bring arts and new ideas to campus.

“I think if we just didn’t provide that at all during the summer that’d be a big disservice to campus,” Sapiro said. “There are students here all summer. We can’t just abandon them for three months.”

Heidi Lang, assistant director for program and leadership development, said WUD Music also begins planning for the summer season around March or April. She said they make sure the larger events, such as jazz festival are set up before students book other music acts for the summer.

WUD Music tries to book music acts for the Madison campus and community which reflect a diverse number of genres and tastes, WUD Music Advisor Courtney Byelich said.

“If someone just randomly walked into [music at the Terrace] they wouldn’t hate it,” Byelich said. “Music is really personal. Whether or not you like X kind of music or Y kind of music or Z kind of music we try and make sure at least the things we are bringing in are good.”

WUD Music has to keep their eyes on new trends to have a successful season, Byelich said.

The ice bucket challenge from several years ago threw some wrenches in their plans when musical acts tried to do it on the stage. This caused some minor problems for performers using the stage after the challenge and for electrical equipment on the stage.

But WUD Music has to be ready for anything, including the ice bucket challenge, to make sure everything goes well, Byelich said.

“People wouldn’t want to be doing their ice bucket challenge on the Terrace stage unless they thought it was a really cool, iconic spot,” Byelich said. “You kind of have to take it in stride and understand that these things happen because people love this place so much.”

The ‘army’ behind the Terrace setup

The Wisconsin Union Directorate is usually a “sea of activity,” according to Heidi Lang, assistant director for program and leadership development.

Nearly 250 full-time employees, 300 volunteers and 1,200 student employees are eager to make the Terrace and it’s events a success, she added. It’s a group effort.

Many people outside of program coordinators help to make everything go well, Lang added. They rely on people at the facilities department to help set up the stage, lights and audio for music events and dining to make sure people can have refreshments during events.

The Union system is funded entirely by $50 million of private donations, operating revenue and non-segregated fees from UW-Madison students.

“Summer has been part of Memorial Union since the 1920’s,” Breneman said. “We really are a place where everyone can play. Whether you like outdoor activities or you like watching films, however you enjoy spending your free time, we have that.”

Fun in the sun, food in the belly

None of these events would be complete without some classic Wisconsin food from the Terrace. But the brat that took ten minutes to cook took nearly a year of planning to get there.

Meghan Roberts-Wollack, account representative marketing for the Wisconsin Union, said Plans get serious as they enter January and February when they hiring campaign and food photo shoots.

The coordinating Terrace season is not incredibly difficult for the dining team because they have years of experience under their belt, Roberts-Wollack said.

“We’ve been doing this for almost 100 years…we’ve got it down to a pretty good science,” Roberts-Wollack said. “All the little hurdles that have come up have happened before.” Weather also set-back the dining team this year as a snowstorm delayed the date they hoped to open their outdoor facilities.

They had to make sure everyone was good with the new set of dates they picked as it takes a wide range of people to help dining be successful, Roberts-Wollack said.

“[Dining staff] really do such a good job getting people through and keeping them happy so that they don’t notice there are businesses out there on the Terrace,” Robers-Wollack said. “We really want people to be out there enjoying the experience…[dining staff] want to be quiet.”

Fun in the sun

The Memorial Union Terrace is a place for students and the community to enjoy their time during the summer months. Much of what makes the place unique seemingly appears before peoples’ eyes. Brats, ice cream, beer, movies and music are just a few, but unknown to many people, these all take serious amounts of time and coordination to ensure they are successful.

“The Terrace is far more than a place,” Breneman said. “It’s the people and the stories that make up the Terrace…while you’re here you’re going to have a great music experience, great film experience and great dining experience.”

The ‘army’ behind the Terrace setup.

The Wisconsin Union Directorate is usually a “sea of activity,” according to Heidi Lang, assistant director for program and leadership development.

Nearly 250 full-time employees, 300 volunteers and 1,200 student employees are eager to make the Terrace and it’s events a success, she added. It’s a group effort.

Many people outside of program coordinators help to make everything go well, Lang added. They rely on people at the facilities department to help set up the stage, lights and audio for music events and dining to make sure people can have refreshments during events.

The Union system is funded entirely by $50 million of private donations, operating revenue and non-segregated fees from UW-Madison students.

“Summer has been part of Memorial Union since the 1920’s,” Breneman said. “We really are a place where everyone can play. Whether you like outdoor activities or you like watching films, however you enjoy spending your free time, we have that.”