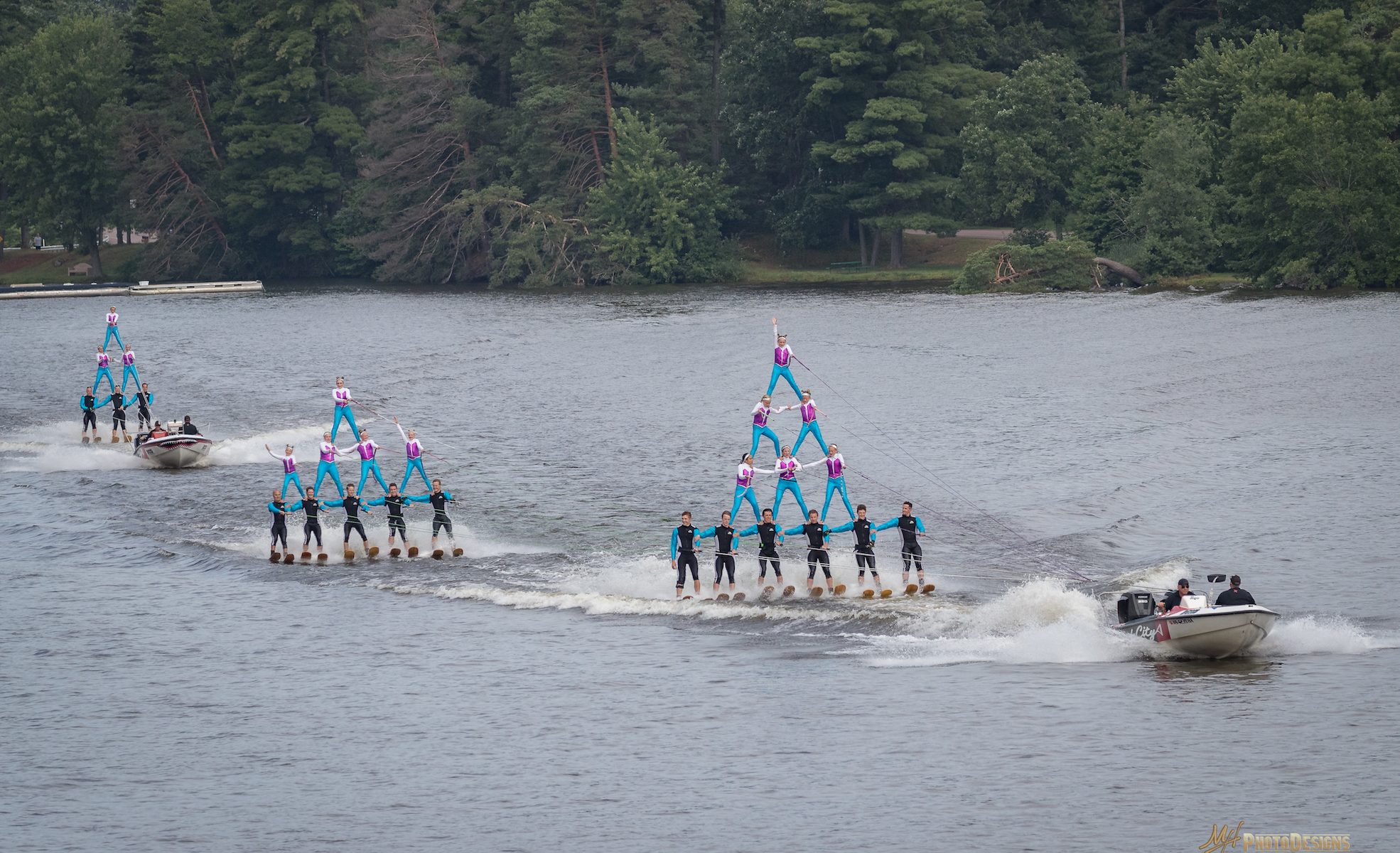 For many, Mad-City Ski Team is a family tradition

The Green Bay Packers have won 13 championships throughout the team’s existence – 100 years in 2019. And yet the Packers isn’t even Wisconsin’s most successful sports team.

The title of Wisconsin’s most successful team should arguably go to Mad-City Ski Team, a show ski team that performs in Madison from Memorial Day to Labor Day and consists of over 100 members of all ages, races, genders and backgrounds.

Winner of 10 national championships, four in a row from 2006 to 2009, Mad-City has been performing in Madison, Wisconsin for over 50 years. Two things have remained consistent over the 50-year span: family and success.

Matt Heilman, a realtor in the Madison area, joined Mad-City in 1988 when he was a kid. Upon joining, Heilman said he dragged his parents along, resulting in his sister joining shortly after. Eventually Heilman and his sister were skiing while their dad drove a boat and his mom sewed costumes for the team.

Now holding onto just about 30 years of experience, Heilman says his kids are following in his footsteps and getting involved with Mad-City, meaning their grandpa [Matt’s dad] is still driving a boat while he and his children are performing on skis.

“What I love best about the sport of show skiing and being on the team is really the family atmosphere,” Heilman said. “Really your teammates also become your family. We have such an awesome group of people, it’s a large team…but we really are like family.”

Mad-City practices and performs on Lake Monona at Law Park throughout the summer months. From ramp jumps all the way to five-tier pyramids, there isn’t much the team doesn’t try in performances, a claim that is backed up by the team’s trophy case.

The team’s first national championship came in 1975. The next four came in the following consecutive years. Mad-City also won the Wisconsin State Show Ski Tournament in 2012, 2015 and 2017, according to its website.

The reason for its success could be attributed to team chemistry, or maybe it’s the unending passion and dedication to the sport that provides a rich history. Or, maybe it’s the family aspect, both literal and theoretical.

The team’s president, Michael Nowicki, has been water skiing for 33 years. His dad was the one who first got Nowicki up on skis so it’s only appropriate that Nowicki was the one to get his daughter up on skis.

Like Heilman, show skiing has been a family activity for Nowicki. Growing up Nowicki’s parents were in a boat while he and his sister skied. Things look a little different now, with Nowicki skiing alongside his daughter while his wife helps out with on-shore operations.

“We are a family organization,” Nowicki said. “It’s a complete family activity for all families whether they want to ski or be a part of the support that it requires to be on the performance.” Like any passion, partaking in the activity delivers some sort of reward: A physical achievement, a mental relaxation tool or some sort of emotional release. That’s what passions and hobbies are for. For Heilman the reward is the family dynamic created on the team from familial and friendly relationships.

“Seeing her [his daughter] with her friends and enjoying things and seeing the joy on her face when she does something new or does something in the show in front of people, she loves it,” Nowicki said. “To me, that’s the rewarding part.”

At this point there is a pattern to be followed. Mad-City Ski Team is more than just a team, literally. The list of members who have family members helping out in some way is a long one.

“I have two daughters that are 10 and 11 who ski on the team. My husband is a boat rider….and I’ve been the stage coordinator,” Wendy Cupp, an on-shore member, said.

As mentioned, Cupp helps out on shore while her family is on the water performing in the show. Asked the same question about a personal reward from being a team member, it’s almost as though déjà vu kicks in.

“I think number one is my kids love it,” Cupp said. “When you see your kids involved in something they absolutely love, I think that’s what has made my husband and I want to be involved… Because they love it so much, if we can do anything to add more to the team, add more value, more support into the skiing industry itself we will do it.”

As the summer progresses, Nowicki says that the crowd starts to grow as more people take notice and intrigue increases.

Cupp describes the fan base as representing Madison as a city.

“I think it’s very eclectic,” Cupp said. “That’s what makes it so cool. There are people who come every week just because they love the show…some of those people may be friends or relatives of ours or people from the community.”

The team also sees an audience show up that may not have known about the team but has seen it perform or practice while passing by and become interested.

“Some people are so intrigued and ask all kinds of questions and next thing you know you’re there on Sunday at the show and they’re there,” Cupp said.

With a family aspect and a loyal fan base, Heilman believes waterskiing and show skiing is popular among participants and fans due to Madison’s geographic location.

“There are just so many types of water skiing that happens in the area, as well as many lake and boat owners wakeboarding, and surfing is growing,” Heilman said. “We have such a water-focused community because of the lakes. They’re such a central piece of our community that water skiing is hugely popular.”

Winning national championships is great, as is commanding a crowd and attention. What’s even better than that is getting to share the experience with a family.

“We joke that we may eat Culver’s every night of the week but at least we eat it together,” Cupp said.

It seems impossible that a sports team with 10 national championships, a handful of state championships and over 140 members could be labeled as a “secret.” Yet, here is Mad-City Ski Team.

“I still think of us as one of the best kept secrets in Madison because not enough people know about it and the ones who do absolutely love it,” Matt Heilman, a realtor in Madison who skis on the team, said.

Although not extremely well-known among the community, the fan base Mad-City does attract is loyal and receptive to the work the team puts in.

Growing throughout the summer as more people began to hear about the performances, Wendy Cupp, a hair stylist in Madison who performs on-shore duties for the team, mentions that many people who come may have been people who walked by not knowing what was going on and returned the next week to see a performance.

“Our community embraces us but a lot of people don’t even know we exist,” Cupp said. “I still talk to people who have grown up in the area and go ‘huh? I didn’t even know we had a ski team in town.’”

Winning four national championships in a row from 2006-2009, one may think the team would have a little bit more notoriety. However, it almost makes it more special and intimate for the fans who do know Madison’s best kept secret and can enjoy the show without Super Bowl-sized crowds.

Maybe by the eleventh national title people will begin to take notice.