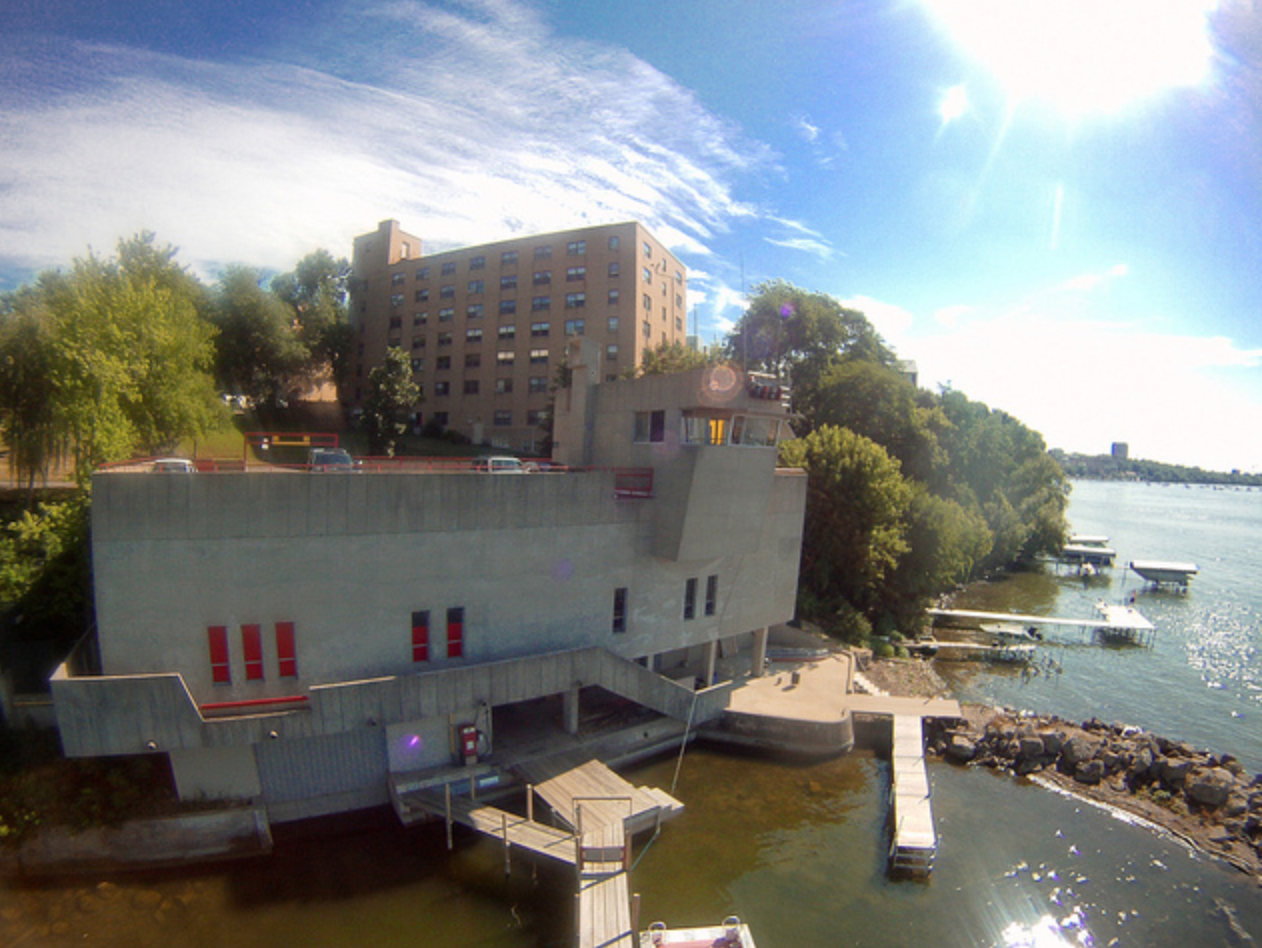 MADISON, Wis.- The small, concrete base tucked away on the shores of Lake Mendota at the edge of Gillman Street often goes unrecognized by most Madisonians. Yet, the work being done by the crew at the UW LifeSaving Station is anything but subtle.

From April to October, a 15-person lifesaving crew conducts between 600 to 800 rescue runs—regardless of the weather. Although its role in the community is constantly changing, UW Lifesaving Station Supervisor Sean Geib says the rescue service has remained true to its values since it was chartered in the early 20th century.

“Even from 1909 to 2018, our mission hasn’t changed,” Geib said. “We want all members of the UW community to feel safe out on the lake. However, we’ve also adopted that we respond to any type of emergency that occurs on the lake.”

In fact, Geib says the station mostly assists members of the Hoofer Sailing Club or responds to distress calls from patrons using water equipment from Memorial Union. No matter how many saves his crew completes, Geib recognizes ensuring safety across 981 acres of freshwater is often difficult.

“Lake Mendota is unique because it is large enough where one could consider it to be rather dangerous,” he said. “You could get 4 to 5 foot waves, rough wind conditions and it can go from calm to rough…And top of that, it is near a campus that has several miles of coastal property that holds thousands of undergrads.”

Fortunately, another Madison organization recognized that the rescue service was doing all that it could to keep its patrons–and itself– afloat.

Now, it was the University of Wisconsin Police Department’s (UWPD) turn to toss the life preserver.

CHANGING OF THE TIDES

Effective communication is key when discussing water safety. However, when UWPD began assimilating into its parent role over the station, Administrative Captain Brent Plisch says the Lifesaving Station was lacking in adequate communication.

“Prior to the oversight by UWPD, the [Lifesaving Station] were not given the necessary tools or system that we have in the public safety community,” said Plisch. “Things like computer-assisted dispatch, radio systems and using multi-disciplinary team training were not always plugged into that network because they were never a part of a public safety organization.”

Plisch, who oversees the UW Lake Rescue and Safety Department at UWPD, says large lifeguard-like programs are common across the country. But, these all tended to fall under parent-like organizations like police stations or fire departments.

When he recognized the UW Lifesaving Station was an outlier in comparison to other programs, Plisch knew it was time for the boys in blue to help the boys in red.

“Now, they, the UW Lifesaving Station, report directly to the police station. We’re doing things like revamping their entire policy manual, revamping their training program and helping them connect with adjacent law enforcement,” Plisch said of the recent collaboration between the safety organizations. “We want them to be tied to other first responder networks because that is really what they are: a first-responder unit.”

For Geib, this collaboration, although still in its early stages, is making small differences seem big.

“[The collaboration has] been great . There’s quite a bit of funding that goes through the UWPD since they oversee the safety and security on campus,” Geib said. “We kind of fall in that branch now. We even got a new rescue boat funded.”

As the summer season beckons, there are numerous choices UPWD must make as it strives to improve the Lifesaving Station. Yet, the station’s hiring process will remain internally-organized, according to Plisch.

“UW Lake Safety is not employed by members of the UWPD. They are all civilians and a team,” Plisch said. “These folks are trained in rescue techniques and for a long time, that program has gone with an internal training structure because of the levels of experience and who have a strong knowledge of the sailing community or paddling community.”

Since the Lifesaving Station is part of UW Lake Safety, though, station members frequently interact, and sometimes hire, student help.

One experienced lifeguard employed by UW Lake Safety is UW-Madison junior Josh Thompson, who is often stationed at the UW Lifesaving Station-run Memorial Union Swim Pier during the warmer seasons.

Thus, with Geib and his crew located just down the shoreline, Thompson voices his appreciation for how the station interacts with the student aquatic staff.

“They are always available to support the lifeguards if a situation is more serious than we can handle,” Thompson said. “The entire staff is very friendly, and always give us a wave if they are passing by. Several times a day I might see their boat around the lake, helping a capsized Hoofer sailboat or a distressed paddle-boarder.”

Every decision, from Thompson’s in-shift water scans to Geib’s hiring process and beyond, takes on heightened importance as tourists are lured to Madison’s safely-monitored, recreational-heavy lakes. According to VisitMadison.com, research from 2016 shows that visitor spending generated more than $2 billion in total business sales as tourism dollars flowed through Dane County attractions.

However, Plisch advises that potential lake users should remain wary, especially if they are under the influence of alcohol. Beer, hard liquor and other mixed drinks are not only served throughout the city, but at Memorial Union- located just feet away from the water.

Not surprisingly, Plisch, Geib and Thompson stress the negative effects of alcohol consumption when out on the lake. However, this issue will be difficult to completely erase from UW. A university-led survey administered in 2015 reveals that 54 percent of students binge drink, or have more than five drinks in one sitting.

In the end, regardless if a patron is in distress because of alcohol, swimming ability or a boat malfunction, members of the UW Lifesaving Station will be there to answer the call. For Geib, being there when help is needed is precisely what he values so much about the job.

“You never should justify why you are doing the job. There’s some illicit fear that everyone has when they get in the water,” he said. “[Experiencing trouble on the water] is a real primal fear and when we can go out and help somebody, it is a genuine form of relief for them.”

“Every time you go out, you’re helping somebody,” Geib said. Josh Thompson, a junior studying Engineering Mechanics and Astronautics, always pays close attention to even the smallest details. He does nothing in small measure, and applies his keen sense of focus not only in the classroom, but during his shifts as a UW Lake Lifeguard.

“Whenever a patron enters the water, a lifeguard is watching them the entire time,” Thompson said. “We take as many preventative measures as possible to avoid being in a position where a patron is drowning.”

Although Thompson boasts certifications in CPR and AED, one angle of patron safety that the UW lifeguards struggle to control are those courtesy of Mother Nature.

“Last summer, Lake Mendota became infested with zebra mussels,” he said. “These small creatures latch on to the rocks and posts at the bottom of the swimming area and are razor sharp. Plus, the swimming area is only 8 feet deep and it is very easy for swimmers to get cuts on their feet while jumping in.”

Despite the risk, Thompson and the other guards try not to discourage lake visitors from jumping in the water, rather, they often encourage it.

“With the growing number of zebra mussels, we recommend foot protection when swimmers are exploring around the shore and in rocky areas.” Thompson said. “The lakes are one of the most integral parts of what makes Madison so endearing to so many people.”

“With that said, it is important that the public is aware of the rarity that we have here, remaining informed about how to keep the lakes clean and safe,” Thompson said.