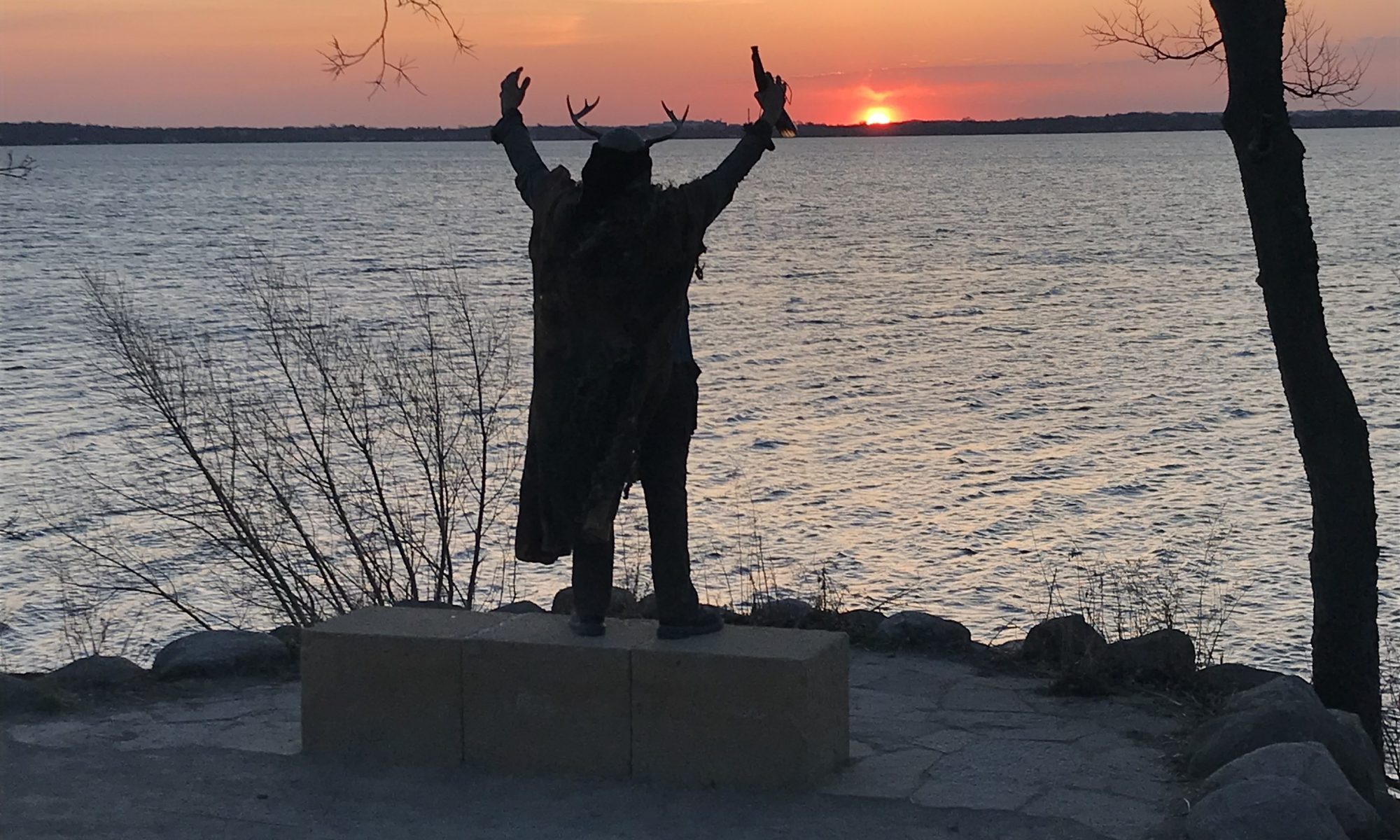 Picnic Point has been a staple on the UW-Madison’s campus since the 1920’s when the nature preserve was privately owned. Picnic Point is a mile long peninsula spotted with fire pits and lake views students and community members can enjoy.

The peninsula rests along Lake Mendota’s south shore. On the morning of May 1st, there are runners, hikers and sightseers along the trails. At the very end of the path, after they reach the end of the peninsula and look out at Lake Mendota, they are ready to turn back and make their way back to the beginning of the path. However, their facial expressions dramatically change as they can’t help but notice a special event going on.

It’s May Day, and just like every year, it means there are about forty Pagans gathering at the end of the Picnic Point path in celebration. It is the festival of Beltane, the start of summer, a holiday cherished by neopagans.

A few of the runners, hikers and sightseers stop to take at the events unfolding in front of them. There is music, dancing, a fire, colorful costumes, bells and whistles and chanting. At 7:30 a.m., one of the runners casually asks in amusement about what is happening. Little does the runner know, the Pagans have been celebrating for three hours and waiting for the sun to rise.

The Pagans arrived at 4:45 a.m. It’s 62 degrees with a clear sky. The neopagans are eager for the sun to rise, and they start a fire. May Day is a day they’ve been waiting for, one of their most special days of the entire year.

“This is like my big day of the year,” said Casey Garhart, an annual attendee. “Where I used to work, we were given one spring religious holiday off, and this is the one I [chose to take] off. I’ve been doing this now for over 20 years.”

“I have to work at nine I’m still here,” said Amy Soderman, dressed in a cow outfit meant to symbolize early agriculture machinery, but she noted the celebration started the night before. “Last night we were out dancing an ‘English Country Dance’ until 9:30 p.m.”

The Pagans don’t know when the ritual’s location started to be held at Picnic Point and Lake Mendota, but they know it’s been a long time.

“I think it’s mostly a great location to watch the sun come up,” said Mike Tuten. “It happens to be a peninsula in the middle of the lake. It’s scenic and lovely. It’s the best place that we’ve found, we’ve been doing it here way before my time.”

Tuten is the man in charge of the ritual. However, that morning, he played a character called “The Betty.” He dressed in a pink a dress and carried a pink umbrella. Tuten had to dig the hole for the May Pole and leads some of the Morris Dancers in their dances.

Soderman posed the question ,“What is May Day?” to fellow Pagan Nancy Lindsay. Without saying anything, Lindsay simply raised her arms to the sky and to the nature around her.

“It’s May Day, it’s as old as the hills and beyond that,” says Lindsay, finally finding the words to explain what the holiday means to her. “The spring is here. The winter has passed. Winter was long and dark and cold and you’re hungry, and then this happens.”

“It’s the clearing of the fields and preparing things for the new growth and abundance that’s coming our way,” Soderman added.

While the sun rises at 5:41 a.m., the character of “The Stag” blows on his horn. “The Stag” is a depiction of “The Horned God”, who is the symbol of fertility and vegetation. The Stag played the horn for about two minutes until the sun made it completely over the horizon. After the process is complete, onlookers cheer and clap. The sun has risen for summer.

The Morris Dance team at the ritual is the only one in the entire state of Wisconsin. Their job this morning is important, Garhart said, because if they don’t dance, then the sun won’t rise for the summer, according to legends.

The dancers are equipped with sticks and handkerchiefs that function as opposites. When they hit sticks together, the dancers are forcing the evil spirits out. When they fly the handkerchiefs around, they are inviting the good spirits. As the dance, the sound of their bells fill the air. Then, the most important event of the day according to Tuten, pagans bury the May Pole.

By the time he was done digging the hole for the pole, Tutten, an older gentleman, had accumulated sweat in his beard.

After the May Pole was settled into the ground, the folks at the ritual grabbed the ribbons around the May Pole and untangle them. In the background, others stood around the fire singing “May Songs.”

During the final event of the ritual, pagans passed around the Winter Witch. They put their woes on the witch, and then burn it in the fire.

With a bellowing laugh, Garhart assured onlookers it was not not in fact a real person being burned.. Then, pagans passed around the Spring Maiden and gave it their hopes and wishes for the upcoming year.

It’s 8 a.m. The celebration has been going on for over three hours now, and it’s time for it to end. They must make the mile long trek back to the parking lot. There is one thing left on the agenda, however, and it happens every year post-May Day morning. For the Pagans, it’s time go to the Original Pancake House, where last year Garhart said they did dances inside the restaurant after the ritual. As they packed up their things, they were already talking about next year’s sunrise.

Mike Tutten has an important job in the May Day ritual. His job as “The Betty” is to lead all of the attendees of the event in the Spring Awakening. He is in charge of burying the May Pole and leads dances and chants.

As the Betty, Tutten must wear a pink dress that represents fertility, and both genders, as he is a man in a dress.

At the first impression, it’s an interesting look. It’s not very often you see a big, thick white beard in a dress. Tutten knows this, because he was skeptical of playing the character at first.

“It’s a character, as you probably guessed since i’m not dressed like the rest,” Tutten says. “It’s a chance to play with people’s minds, so it’s always enjoyable from the standpoint.”

Tutten has been playing the Betty since 1989, back “when he was younger and didn’t have a beard.”