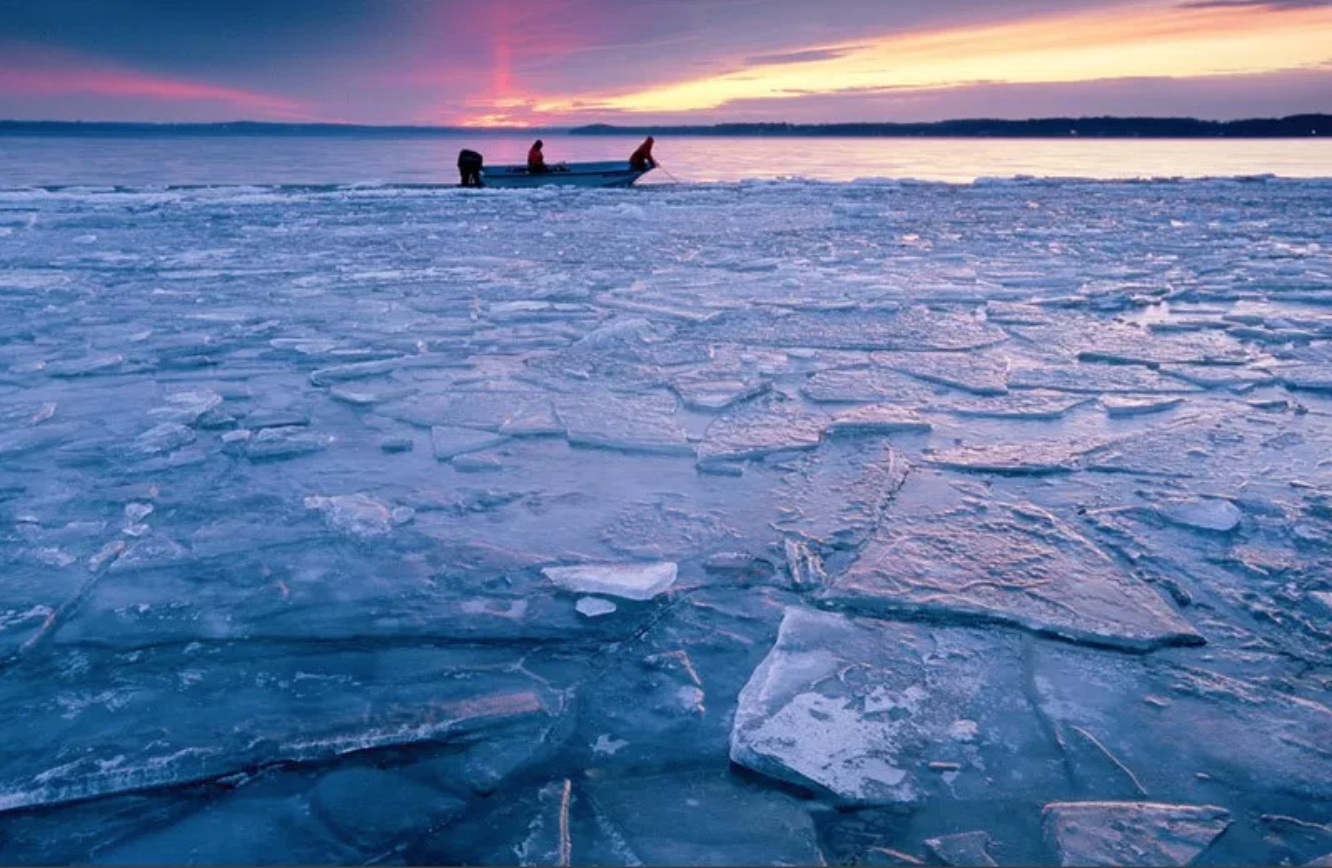 A global team of researchers are working to understand the effect temperature has on when lakes freeze and thaw – and how this affects the identity of those who live near and rely on its waters.

Researchers from the Midwest and around the globe in Sweden, Italy and Canada were inspired to research the ways ice duration of lakes effects ecology, culture, and identity after the group met at the Global Ecological Observatory Network.

The group is working on a paper that will pull together, for the first time ever, a comprehensive perspective on ice loss across the world and its far-ranging effects – from the economy and ecology to culture and religion.

Magnuson, Professor Emeritus of Zoology and Limnology at UW-Madison, brings his expertise in ecology to the project. He’s been studying ice variability of lakes since the 1960s and helped to form UW’s Center for Limnology in 1982.

Growing up in Northern Illinois, he said he did not have a fascination with ice as a kid. Living in Madison, however, informed Magnuson of the central figure ice can play in forming culture and identity.

Flocks of people come to Lakes Mendota and Monona every winter to ice fish, ice boat, snowmobile, fly kites as part of Kites on Ice, and host festivals. Without ice, Madison is not really Madison, Magnuson said.

UW has been tracking ice coverage since 1853. Magnuson and other researchers have used these extensive records to write numerous papers on ice loss. One of these papers, which looked at ice loss of lakes in the Northern Hemisphere, shows a clear trend: in the past 100 years – specifically after the start of the Industrial Revolution – lakes are both freezing later and thawing earlier.

Magnuson said the effects of variable freezing on ecology are hard to pin down. Even in neighboring lakes, characteristics like Bluegill populations or chemical properties seem to act independently.

But he said there are two variables which are linked together consistently: ice breakup and summer surface temperatures. If the surface temperature of a lake is warmer than normal, scientists can predict with a fair degree of accuracy that the lake will freeze later.

To Magnuson’s chagrin, scientists used his data to talk about climate, ignoring all the other factors that ice loss has on a community.

For this reason, he wrote a paper in 2014 with his colleague Richard Lathrop, which focused on the beauty of ice covered lakes. Magnuson said they included stunning photographs of frozen lakes to highlight what is at risk of being lost.

Lesley Knoll, Adjunct Assistant Professor and the Station Biologist at Minnesota Twin Cities’ Itasca Biological Station, was brought into the project to complement Magnuson’s technical research with her own “human aspect” research.

Knoll’s concentration is on the impact warm winters and shorter ice durations have on a winter activity fundamental to the identity of Minnesotans: ice fishing.

Itasca has been tracking ice data since the 1930s. Like Magnuson, scientists at the station have discovered a clear trend of lake’s freezing later in the year and thawing earlier. In 2016, Lake Itasca’s “ice in” date, or the day the lake completely freezes over, was Dec. 9, the latest date on record. Its “ice out” date, or the day the lake is completely free from ice, was April 7, earlier than in years past.

“There can still be variability each year, but when you look at the long term trends since the 1930s, we see these changes,” Knoll said.

In Wisconsin, the cultural importance of ice fishing is similar. Nick Wollmer, a junior at UW-Madison, said he started ice fishing with his family when he was young.

“It was always something I looked forward to as a kid,” Wollmer said.  “It was a family tradition.”

He said they would host the Wollmer Family Jamboree every year on the frozen surface of Browns Lake in Burlington, Wisconsin. They would set up tents, cook food, drink beer, hope to catch some fish, and celebrate.

But as the lake froze later in the year, it was not solid enough to fish on during the Wollmer kids’ school winter break – the only time that the whole family could all gather. Unfortunately, the tradition faded away.

“I haven’t been ice fishing in four years,” Wollmer said. “The rest of the family doesn’t do it much anymore either.”

In other parts of the world, religious ceremonies have disappeared along with their ice.

Magnuson and a team of researchers looked at religious records kept by Japanese Shinto priests starting in the 15th century. The records detailed ice freeze dates of the sacred Lake Suwa nestled in the Japanese Alps.

As legend says, the “male god Takeminakata would cross the lake to visit the female god Yasakatome at her shrine on the other side,” according to the National Geographic’s summary of their findings.

Using the oldest known ice freeze records, the team of researchers watched as the climate changed and the lake would freeze later and later. Then, tragically, the lake stopped freezing regularly. Where once it would freeze every year, Lake Suwa would only freeze every few years.

As the ice melted, so did the legend. Eventually, Magnuson said, the legend that Shinto priests had celebrated for 700 years evaporated.

In 100 years, Magnuson said Lakes Mendota and Monona will only freeze for short periods of time, and he fears for what the soul of Madison will lose in the process.

This led Magnuson and Lathrop to conclude in their 2014 paper: “Who are the advocates for winter and ice covered lakes? We hope that our children, their children, and their grandchildren, will be able to experience and enjoy one of the unique feature of lakes in winter – lake ice.”

Along with the slow melting death of the lake ice, the live inhabitants on these waters could experience a similarly dire fate.

Magnuson said when a lake freezes, it’s like a cap on a bottle: all the natural processes taking place in the lake have no interaction with anything above the surface of the ice. With a fixed amount of oxygen, a lake’s CO2 levels slowly build. In deep lakes this is no problem – there will always be enough oxygen to go around. But shallow lakes are eventually completely deprived of oxygen, becoming anoxic.

Apex predators like bass cannot live in anoxic lakes, but a suite of specialist species have adapted to survive in low-oxygen environments.

Meet the Central Mudminnow. It’s an air breather but can live under the ice by intaking the oxygen left behind by other animals and natural processes. When a muskrat or beaver jumps into a lake, for instance, the animal leaves a trail of oxygen bubbles which the Central Mudminnow then gobbles up.

If the lake had less or no ice in the winter, however, it would have enough oxygen for apex predators to survive, spelling the end for the Central Mudminnow.

“From a fishermen’s perspective – bravo – you got bass in this little lake,” Magnuson said. “But from a biodiversity thing it’s one of the last hangouts of species that have managed to eke out an existence because that's when predators couldn't gobble them up.