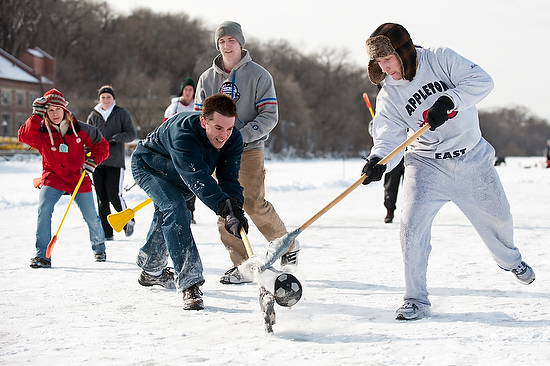 Broomball, an intramural sport offered at the University of Wisconsin-Madison, allows students to use Lake Mendota during the winter months despite it being completely frozen.

While most people immediately associate UW-Madison athletics with its elite basketball and football programs, the university provides every student with the opportunity to compete in a variety of sports through its intramural system through IMLeagues. One of these other sports is broomball. Since broomball is now offered in both semesters, students around the university have become extremely familiarized with this sport on campus.

Despite being a somewhat unknown sport globally, broomball most closely resembles ice hockey which makes the sport easy to learn due to its simplistic nature.

In a 2008 article for Princeton Alumni Weekly, Julia Osellame claimed broomball originated in Canada before cultural diffusion brought it to America less than a century ago.

“Broomball is growing in popularity not only at Princeton, where it has been played since 1985, but around the country. Histories of the sport report that it originated in the early 20th century in Canada and migrated to the United States in the 1930s,” Osellame said.

Although the sport’s origins at UW-Madison cannot be definitively traced, this sport has enough popularity that the university offers four separate intramural leagues during the winter and the summer. Students are able to sign up for these intramural opportunities but need to pay a small fee in order to officially register within the IMLeagues database.

However, some students might prefer to play in their own pickup broomball games due to the mandatory intramural fee that the university charges its students.

According to the university’s IMLeagues handbook, all broomball games are played at the Camp Randall Sports Center and students who pay their intramural fees are the only ones who can participate. Since it only takes a ball, some brooms and two goals to play, some students started playing broomball on Lake Mendota for free.

“Why should I pay the university to play when I can organize it myself for free? The lake is practically unused every winter so my friends and I decided to put it to some use,” Mulhaney said.

He also mentioned how a decent number of brothers within his fraternity, Pi Lambda Phi, have joined him on the lake to enjoy the competitive experience of broomball.

Wyatt Hassemer, a UW-Madison sophomore, was heavily involved in high school sports but wanted to try something new once he got to college. Broomball seemed to be the answer.

“I spent my whole life playing basketball and football competitively in school. I wanted to try out a different sport with some friends and broomball gave me the opportunity to meet some new people,” Hassemer said.

“Since I’m originally from Minnesota, hockey has always been a passion of mine,” Nowak said. “However, I got tired of buying new skates and sticks all the time. For broomball, there is no mandatory equipment. I can show up with an old broom and some sneakers and have a great time.”

However, one potential concern regarding this unsanctioned use of the lake is its safety. Is it possible for the ice to theoretically break which could potentially endanger the life of a student? This uncertainty could definitely deter some students from playing or even walking on Lake Mendota during the winter.

Ethan Hammen, a UW-Madison junior, has never been on a frozen Lake Mendota due to the potential safety hazard.

“I know that people walk on it all the time and that it is probably safe, but you never really know for sure. I just don’t think that it is worth the risk,” Hammen said.

When asked about the potential safety risks associated with broomball on Lake Mendota, Mulhaney seemed rather confident that the ice would not break.

“I have spent my entire life living in Wisconsin. Those winters are brutal. I know for a fact that there is at least a foot of ice on Lake Mendota. It is definitely not going to break during a broomball game. I’m confident that this sport is safe to play on that lake,” Mulhaney said.

Although some students might be too scared to try it, other students think that it looks like fun and would be open to trying it in the future.

Dakota LeCaptain, a UW-Madison junior, has never tried broomball on the lake before but would consider trying it in the future due to the entertaining and physical nature of the sport.

“Of course I would try it. I get to hit people on the ice while wearing sneakers? That sounds like a lot of fun. I will definitely have to look into that next winter once the lake freezes over again,” LeCaptain said.

Although broomball is just a recreational activity on campus, it represents something more. It showcases the grit and innovative nature of the student body. It allows students to use Lake Mendota during its offseason by letting them compete with each other for free during the cold winter months through the use of basic shoewear and household appliances.

Although I have never played broomball in my life, I can personally say that this sport sounds extremely fun and I look forward to trying it on Lake Mendota during my senior year similarly to Dakota LeCaptain.

Although the lake has completely defrosted at this point in time, students can still enjoy broomball on campus during the spring at the university’s ice rink located in the Camp Randall Sports Center.

Despite the desire for Michael Mulhaney to play broomball for free on campus, he surprisingly decided to also pay for broomball intramurals this past winter.

Mulhaney, along with some of his Pi Lambda Phi fraternity brothers, participated in the broomball league this past fall semester with the hopes of winning a championship. The intramural league was based on a tournament style bracket which consisted of single elimination.

Despite their mutual love for broomball, Pi Lambda Phi lost in the first round of the tournament and were thus eliminated from the competition. After the contest, Mulhaney told me he injured his leg when he slipped and fell on the ice in the middle of the game.

However, Mulhaney has recovered from his injury and still gets together with some of the fraternity brothers a few times a month during the spring to play broomball in UW-Madison’s Shell gymnasium.

Whether it is for pure recreational purposes or a chance to practice for next fall’s intramurals, expect Pi Lambda Phi to return to the ice with championship expectations.