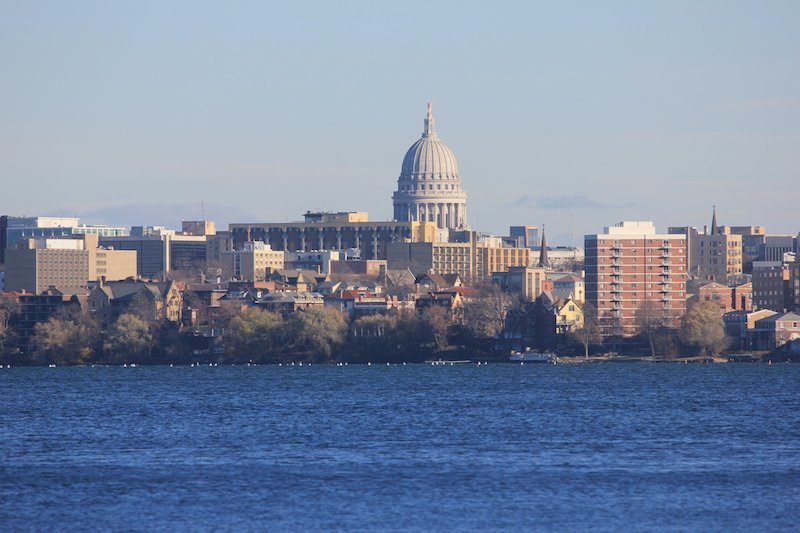 If you walk around Madison’s capitol square and look to your left and to your right, you will see not one, but two lakes. Wisconsin’s capital is one of less than two dozen cities in the world that is bordered by two bodies of water — making it an isthmus.

The city has become so synonymous with its geographic position that it’s been nicknamed “the city on an isthmus.”

“The lakes are fundamental to [Madison’s] existence. They define us,” said Stu Levitan, City Commissioner, author of two books on Madison’s history and a longtime resident.

While Madisonians like Levitan enjoy benefits of living so close to two lakes, the city hasn’t always been so connected to the water and has had to overcome transportation obstacles to keep the isthmus livable.

“The lakes are Madison’s greatest asset and its greatest issue at the same time, and that’s always been true,” said Jim Draeger, state historical preservation officer at the Wisconsin Historical Society. “There is not a lot of room between Lake Mendota and Lake Monona so you have a natural constriction on the heart of the city.”

Much of the city’s current layout can be traced back to James Dotty, an influential player in creating the Wisconsin Territory, according to Levitan. Dotty, in fact, is a big reason Wisconsin’s capitol resides on the isthmus because he owned the land that became Madison and lobbied for it to be placed here in order to profit from land purchases.

“Dotty was a force of nature at getting things to happen, but he was a lousy urban planner,” Levitan said.

When Dotty selected the plan for Madison, he basically “plopped” a grid down over the city, Draeger explained. It was similar to other city plans at the time, but Dotty did not account for Madison’s unique position at all.

“The original plan was Dotty not reserving lakefront for public use,” Levitan said. “That’s the original sin of Madison planning.”

The original city plan didn’t allot for public access to the lake. All lakefront property could be bought for any purpose — homes, businesses or, eventually, manufacturing. Like many cities of the time, there was no rationality or overall thinking to how Madison should be laid out, Draeger said.

“It’s just unconscionable what he did to not preserve lakefront… for public access,” Levitan said. “And we’ve been dealing with that ever since.”

It wasn’t until John Nolen came to Madison in the early 20th century that the city started to think about its relationship to the lakes and incorporate them into city planning.

Nolen was originally brought in by a private group to look at creating and connecting city parks, Draeger said. Eventually, he was hired by the city to create a master city plan, according to Isthmus.

Through his work with the city, Nolen wrote Madison: A Model City and catalogued the pitfalls of haphazard growth caused by the framework set by Dotty — lakefront property was used as a dumping ground for sewage and trash from the city’s industry, but children didn’t have parks.

“[It’s] then you get the first broad general public support for making greater use of this amazing location we’ve got,” Levitan said.

Nolen was part of the first generation of city planners who wanted to design cities to work with their environment and be better citizens, according to Draeger.

“That’s why he calls it Madison: A Model City,” Draeger explained. “Because what he’s saying is ‘here are some … new ideas about city planning that are going to transform the way that Madison is and make life better for people who live there’.”

Nolen’s assessment was met with criticism, but eventually the city adopted many of his suggestions, including protecting the Capitol view, creating Law Park and improving public access, according to Isthmus.

However, public interest in Madison’s lakes has ebbed and flowed over the years, Levitan said.

It wasn’t until Otto Festge was elected as mayor in 1965 that the city started acquiring land to create James Madison Park. But at the same time, plans to build the Monona Terrace were embroiled in city politics. Image by Richard Hurd, Flicker. James Madison Park on an evening in early May.

The Terrace plan was shelved in 1967 after a failed referendum, but was eventually built in the 1990’s under Paul Soglin. This was a huge accomplishment, Levitan said, and a conscious effort to capitalize on the lakes

Over the years, Madison has had a few missed opportunities to capitalize on the lakefront, Levitan added. In the late 1960s, Festge and architect Karl Karmath created the Monona Basin project, which would have developed much more of the lakefront with amphitheatres, paths, fountains, a convention center and more.

Part of Monona Terrace includes a path and fishing pier, but that pales in comparison to what could have been, Levitan said.

Currently, the planning commission has to deal with pressing issues, such as affordable housing, but they still want to increase access to the lakes, said Rebecca Cnare, an urban design planner for the city.

“Every generation or so we say, ‘Hey, let’s do something good for the lakes so they’re more accessible to more people’,” Levitan said. “And now I think we’re in one of those upswings again.”

Cars were science fiction when Dotty and early officials laid Madison’s first roads designed for pedestrians and horses. This constraint, combined with the narrow isthmus, have posed unique obstacles officials have to overcome to create transportation systems that can transport a city’s population through and around the isthmus.

“You have to go through it or you have to go around it,” said Bill Schaefer, Madison’s transportation planning manager. “And we try to discourage people from going through it.”

Unlike many cities, Madison doesn’t have a major highway that connects directly to the downtown. In the 1960s, a mayoral candidate suggested putting a highway right through the Isthmus but luckily that plan was never adopted because it would have ruined the livability of downtown, Schaefer said.

Instead, residents can take the Madison Beltline. Instead of going through the isthmus, the highway can take people around the lakes to travel from the east to west side and out to the suburbs. Image courtesy of the Madison Area Transportation Planning Board

In the future, Schaefer predicts, cities will try to discourage people driving downtown all together and heavily promote walking or public transit when downtown.

A recent study commissioned by the city’s transportation committee showed that people who commute through the isthmus are typically traveling to a place on this isthmus and couldn’t go around it. Parallel roads, such as University Ave. and Johnson Street, that use one-ways are helpful to direct this traffic because it decreases time needed at stop-lights, Cnare said.

But with new high rises being built downtown, the isthmus is poised to grow even denser.

“It’s definitely a consideration, and that’s parts of the reason why we’re looking more at transit as an alternative,” Schaefer said. “But [we’re] also just looking at it as, yes, there’s going to be more traffic, but that’s inevitable in cities. But [we’re] making sure that people have options so they’re not just stuck.”

Schaefer said that a denser city could be a benefit for city planners. When people live closer to work or entertainment they might be more likely to take the bus, walk or bike. The city’s early layout is actually helpful for this goal because in the pre-car era street blocks tended to be closer together and offer more options for pedestrians.

In the next decade the planning committee hopes to implement Bus Rapid Transit. Unlike the current bus system, the rapid transit system would be competitive with cars traveling from the suburbs and sometimes be able to bypass traffic.

“I would say that’s priority number one,” Schaffer said.

She added that in the next fews years the city wants to connect lakeshore path to James Madison park, update Law Park on Lake Monona and a new public market may move to the isthmus.

“There are very few cities on isthmuses… It’s a very unique thing that we get to celebrate,” she said. “We really see the isthmus as a benefit because of the beauty it brings, and the uniqueness that it brings.”

This summer, Levitan said you can find him alongside other Madisonians windsurfing and sailing on the city’s lakes.

The Nolen Waterfront would be a 9-acre park over John Nolen Drive and would include underground parking, according to the Isthmus. The project would finally build the boathouse Frank Lloyd Wright planned in 1893 and be an extension of Law Park, according to the Wisconsin State Journal.

The city is already studying ways to better integrate Law Park into downtown, and the Nolen Waterfront is one plan they’re considering, according to the Wisconsin State Journal. The group that designed the plan also designed Chicago's Millennium Park.

However, the heavily trafficked intersections along John Nolen Drive could provide obstacles for the team.

Levitan said the plan is indicative of the public’s recent interest in more access to the lakes. In the past, the city intermittently completed projects such as James Madison Park, but fought over other plans to capitalize on the lakeshore.

“We've done a good job [connecting the city to it’s lakes], let’s see if we can do a better job,” Levitan said. “Let's see how these current concepts play out to build the Nolen Waterfront plan. If we can do that, we can regard ourselves as a success.”